“A life which does not go into action is a failure.” 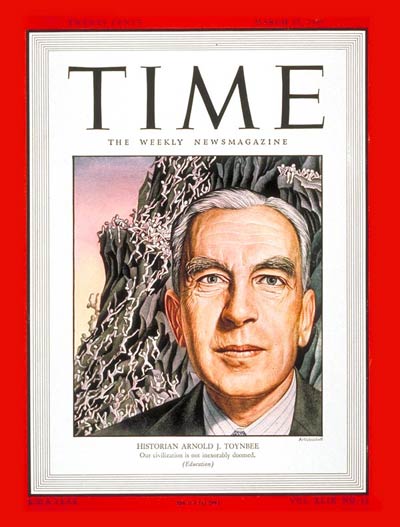 Arnold Joseph Toynbee (April 14, 1889 - October 22, 1975), was a British historian whose analysis of the rise and fall of civilizations, A Study of History (also published as History of the World) was very popular during its publication in twelve volumes between 1934 and 1961.

Born in London, he studied at Winchester College and Balliol College, Oxford. He worked for the Foreign Office during both World War I and World War II. He was Director of Studies at the Royal Institute of International Affairs and a Research Professor of International History at the University of London.

Toynbee was interested in the seeming repetition of patterns in history and, later, in the origins of civilization. Toynbee grew excited by what he saw as strong parallels between the situation in Europe between World War I and World War II and the ancient Greco-Roman civilizations.

In his Study of History Toynbee describes the rise and decline of 23 civilizations. His over-arching analysis was the place of social, economic, political, cultural, and technological challenges, and response to such challenges, as the reason for the resilience or decline of a civilization. He described parallel life cycles of growth, stagnation, a "time of troubles," and a final collapse leading to a new genesis.

According to Toynbee, his studies revealed civilizations arose in response to some set of challenges of extreme difficulty, when "creative minorities" devised solutions that reoriented their entire society. Early challenges and responses were physical, as when the Sumerians developed the agriculture of modern southern Iraq by organizing the Neolithic inhabitants into a society capable of carrying out large-scale irrigation projects. When a civilization responded to challenges, it grew.

Civilizations disintegrated when their leaders stopped responding creatively, and the civilizations then sank owing to nationalism or militarism. According to an Editor's Note in the final edition he released before his retirement, Toynbee suggested the analogy that "societies always die from suicide or murder rather than from natural causes, and nearly always from suicide." He saw the growth and decline of civilizations as a function of the ability of the citizens to remain focused and responsive: "We achieve civilization, not as a result of superior biological endowment or geographical environment, but as a response to a challenge in a situation of special difficulty which rouses us to make a hitherto unprecedented effort."

Although he found the patterns, and even though he formulated definite laws or principles of development such as "challenge and response," Toynbee insisted that the cyclical pattern could, and should, be broken. He suspended work on his great project to write a series of essays about the challenges he saw after the events of World War II, Civilization on Trial, published as a collection in 1947.
​
Toynbee's books, huge in scale, achieved wide prominence, Published over time, he also had to opportunity to revisit and refine his ideas over 30 years as contemporary events in his lifetime seemed to fit or diverge from his theoretical patterns of history.

Quotations summarizing the evolution of Arnold J. Toynbee's
​observations from The Study of History

"Civilizations, I believe, come to birth and proceed to grow by successfully responding to successive challenges. They break down and go to pieces if and when a challenge confronts them that they fail to meet."
​
​"On this showing, the nature of the breakdowns of civilizations can be summed up in three points: a failure of creative power in the minority, an answering withdrawal of mimesis on the part of the majority, and a consequent loss of social unity in the society as a whole."
​
"Of the twenty or so civilizations known to modern historians, all except our own appear to be dead or moribund, and, when we diagnose each case, we invariably find that the cause of death has been either War or Class or some combination of the two."
​
"The human race's prospects of survival were considerably better when we were defenseless against tigers than they are today when we have become defenseless against ourselves."
​
​"The world's greatest need . . . is mutual confidence. No human being ever knows all the secrets of another's heart. Yet there is enough confidence between mother and child, husband and wife, buyer and seller . . . to make social life a practical possibility. Confidence may be risky, but it is nothing like so risky as mistrust."

"It is a paradoxical but profoundly true and important principle of life that the most likely way to reach a goal is to be aiming not at that goal itself but at some more ambitious goal beyond it."
​
​"The aim of all education is, or should be, to teach people to educate themselves."

"The supreme accomplishment is to blur the line between work and play. Immaturity means self-centeredness, inability to compromise, to rise above hurt feelings, to postpone immediate pleasures in favor of future benefits, or to do unpleasant chores when they need to be done."

"Apathy can be overcome by enthusiasm, and enthusiasm can only be aroused by two things: first, an ideal, with takes the imagination by storm, and second, a definite intelligible plan for carrying that ideal into practice."
​
“A life which does not go into action is a failure.”
--Arnold J. Toynbee 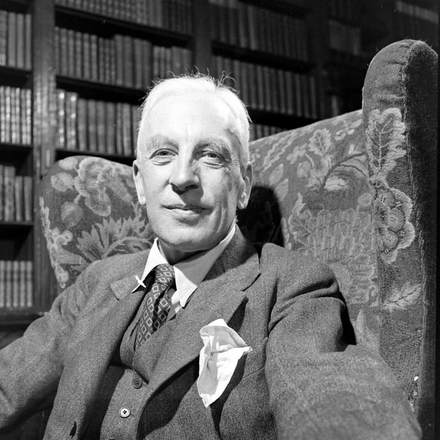 The Toynbee Convector
​by Ray Bradbury
​ 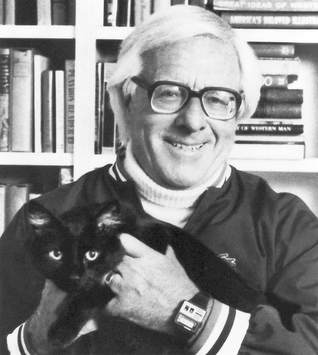 Ray Bradbury, American novelist, short story writer, essayist, playwright, screenwriter and poet, was born August 22, 1920 in Waukegan, Illinois. His reputation as a writer of courage and vision was established with the publication of The Martian Chronicles in 1950, which describes the first attempts of Earth people to conquer and colonize Mars, and the unintended consequences. Next, in 1953, came Fahrenheit 451, which readers many consider to be Bradbury's masterpiece, a scathing indictment of censorship set in a future world where the written word is forbidden.

Ray Bradbury's work has been included in four Best American Short Story collections. He has been awarded the O. Henry Memorial Award, the Benjamin Franklin Award, the World Fantasy Award for Lifetime Achievement, the Grand Master Award from the Science Fiction Writers of America, the PEN Center USA West Lifetime Achievement Award, among others. He adapted sixty-five of his stories for television's Ray Bradbury Theater.

On the occasion of his 80th birthday in August 2000, Bradbury said, "The great fun in my life has been getting up every morning and rushing to the typewriter because some new idea has hit me. The feeling I have every day is very much the same as it was when I was twelve." Ray Bradbury died June 5, 2012, in Los Angeles, California.