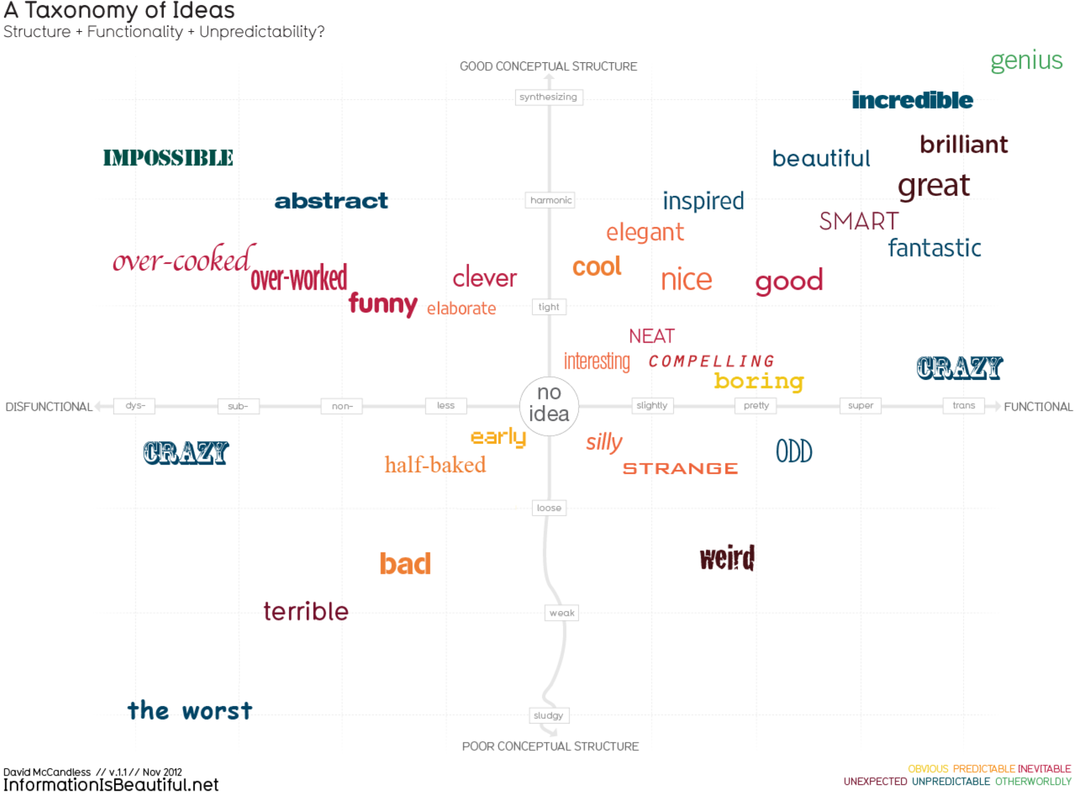 We are OK Go, and we've been together as a band since 1998. But in the last decade, we've become known as much for the elaborate music videos, like the one we just saw, as for the songs they accompany. So we will play along with another one of those in a few minutes, but in the meantime, we want to address this question that we get asked all the time but we've really never come up with an adequate answer for it, and that is, how do we think of those ideas?


The videos are not all Rube Goldberg machines, by the way. Last year we did a dance in zero gravity, and once we set up an obstacle course out of thousands of musical instruments in the desert, and then played them by stunt driving a car through them.

For one of the videos, we choreographed hundreds of people with umbrellas in an abandoned parking lot outside Tokyo, and then filmed them from a drone a half a mile in the air.


So it's all of these ideas that people are curious about, and the reason we've had so much trouble describing how we think of these ideas is that it doesn't really feel like we think of them at all. It feels like we find them. And by way of explanation -- well, I have a compulsive habit. I play parallax and perspective games with my eyes pretty much all the time, and it's something I've been doing since I was a teenager. And I think the big contributing factor may have been that this is how I decorated my high school bedroom.


And being a teenager, what I did in there, of course, was just talk on the phone for staggering amounts of time. So I was in this visual maelstrom just pretty much usually sitting in one place, and I guess just the overload in general -- my brain kind of tried to make sense of it, and I would -- If I could move my head off to one side a little bit, the edge of the desk would line up just perfectly with that poster on the opposite wall; or if I put my thumb out, I could close first my left eye and then my right, and my thumb would bounce back and forth between Jimi Hendrix's left eye and his right.


It was not a conscious thing, of course, this is just kind of the equivalent of doodling while you're talking, and it's still something I do all the time. This is my wife, Kristin --

And it's not uncommon that we are out at dinner, and in the middle of a great conversation she'll just stop mid-sentence, and when she stops is when I realize that I'm the one who's acting weird because I'm like bobbing and weaving. And what I'm trying to do is get that ficus back there to stick out of her head like a ponytail.


The point of telling you all this is that -- for me this is what it feels like to have an idea. It's like they're made of these disparate parts, these disparate chunks sort of floating out there. And if you're receptive and you're observant, and crucially, if you're in exactly the right place, you can get them to just line up.


So if you get used to -- if it's your job to think of ideas this way, they'll start beckoning to you the way that Jimi's eyes beckoned from that poster, or the ficus beckons from behind Kristin's head. Writing music feels like that process just over and over again, like you've got a bunch of sounds or a groove or a chord progression and you're just looking for that thing on the other side, that little chunk over there, that puzzle piece that clicks right in. And when it does click, it doesn't feel like you thought up that puzzle piece, it feels like you found it -- like it was a set of relationships that you unlocked.


But with the videos in particular, we're usually looking for this specific feeling which is wonder. And there's always a component of surprise to wonder, so we're not just looking for good ideas, we're looking for good ideas that surprise us in some way. And this causes something of a problem, because ... the process that we all use to make stuff, it actually has a very strong bias against surprising ideas.


The process I'm talking about is the one you all know -- we all do it all the time. You think of an idea. You just sit and think of your brilliant idea and then you come up with a plan for how you're going to make that idea happen. And then with that plan in mind, you go back and double-check your original idea and maybe revise it, and then bouncing back and forth between the idea and the plan, the plan and the idea, eventually you come up with a truly great plan. And then once you have that, and only then, do you go out and you execute. And this is like -- this is sort of a flawless system in terms of maximizing your resources, because this -- super cheap. Thinking usually costs very little, but this is really expensive most of the time, so by the time you get there, you want to make sure you're super prepared and you can squeeze every last drop out of what you've got.


But there are problems with this, and math will help us reveal the biggest one. Go back to that video that we just showed you. That Rube Goldberg machine, it had about 130 interactions in it. That was 130 things that we had to have go according to our plan. So let's assume that we want to make a new video now, similarly complex -- 130 moving parts. If we're really good planners in that system, it seems like maybe we could be good enough to get every part of that system to be 90 percent reliable. 90 percent sounds good, right? Well, it's not. It's terrible actually. The numbers say so. The chance of getting all 130 things to not fail at the same time is .9 for 90 percent to the 130th power. So calculate that out and you get ...


.000001, which is one ten-thousandth of one percent, so your chance for success is literally one in a million.


.27 -- 27 percent. Significantly less daunting -- like this might even be usable. But really think about that. How many parts of your lives are 99 percent reliable? And could you really get 130 of them all in one place at once? And if you really could, doesn't it seem like you deserve to succeed? Like that is -- that thing is going to work, right? But no, it actually fails three times more often than it succeeds.


So the upshot of all this is that if your project is pretty complex -- like, you know, every ambitious project is -- if you've got a lot of moving parts, you're basically constrained to just reshuffling ideas that have already demonstrably proven that they're 100 percent reliable. So now go back to me sitting with my thumb in the air trying to line up something surprising. If the only things I'm allowed to consider in the first place are ideas that have already been done over and over and over again, I am screwed. However, there are ways around this, because we all know that there are tons of untried ideas still out there, and plenty of them will turn out to be every bit as reliable as we need, it's just that we don't yet know they are reliable when we are at this planning phase.


So what we do is we try to identify some place where there might just be a ton of those untried ideas. We try to find a sandbox and then we gamble a whole bunch of our resources on getting in that sandbox and playing.


Because we have to trust that it's the process in the sandbox that will reveal to us which ideas are not only surprising, but surprisingly reliable.


So some of the sandboxes that we've started videos with. Let's play with optical illusions. Let's try to dance on moving surfaces. Let's try to make toast with a laser cutter. Or let's do something in one of those zero-gravity airplanes. But then instead of actually trying to sit there and think out what that something is, we spent a full third of our budget getting in an actual Vomit Comet and bouncing off the walls for a week.


So this may seem to you like testing, but it really isn't, because at this point we don't yet know what our idea is, we don't have a plan to be testing. So we're just -- we're just playing, we're just trying everything we can think of, because we need to get this idea space filled up with a chaos like the one in my high school bedroom. Because then, if we can do the bob and weave thing, if we can put our thumbs up and get just a few things to line up --


chances are no one else has ever made those same things line up before. And when we're done with that project, people will ask us again how we thought of that idea, and we'll be stumped, because from our perspective, it doesn't feel like we thought of it at all, it just feels like we found it.


So we'll play another video for you now and the song along with it. This is for the song "The One Moment," and for this one, the sandbox was ballistics and math. So I spent a full month putting together a giant spreadsheet for this. It was like my playspace was 400 lines long and 25 columns wide -- which I presume that if anybody is going to understand that, it's this crowd.


Nothing is better than a giant spreadsheet, right?

Well, thank you everyone, very much. We are OK Go, and this is called "The One Moment."

Upside Down and Inside Out

I Won't Let You Down