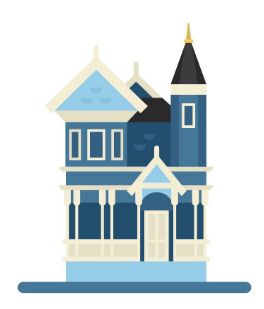 Queen Anne Period Music
The Queen Anne style (1880-1910) is the most commonly recognized style in Victorian architecture. It was named by Richard Norman Shaw based, inaccurately, on styles believed to be popular during the reign of Queen Anne (1702-1714). The style really had more elements of the styles popular during the Elizabethan period.
It became popular in America after it was seen at the Philadelphia Centennial in 1875. Many of the decorative “frills” on this style were made possible by the Industrial Revolution because they could be mass produced.
The key identifying features of this style are its lack of symmetry, highly decorative trims, spindles, towers and steep roofs.
Features Include:
Comparisons with other Victorian-era revivals: