Memory Skills and Methods
for Study, Presentations, and
Creativity 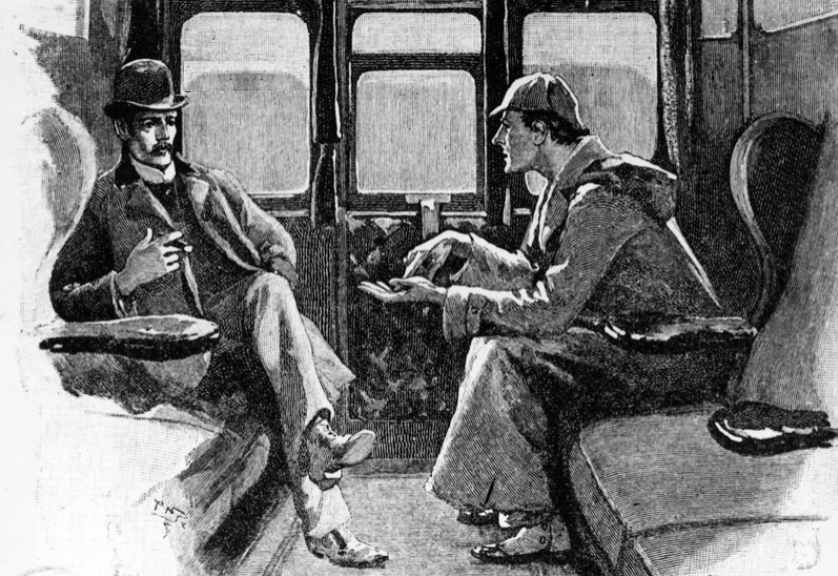 This iconic Sherlock Holmes illustration by Sidney Paget (1860-1908) first appeared in the December 1892 Strand Magazine.  Captioned in the magazine as "Holmes gave me a sketch of the events," it shows the duo riding in a train on their way to investigate the disappearance of the race horse Silver Blaze and the "curious incident of the dog in the night-time." Padget established the classic images of Holmes and Watson in the public imagination and was responsible for introducing the deerstalker cap as an icon for Holmes. ​
“I consider that a man's brain originally is like a little empty attic, and you have to stock it with such furniture as you choose.

A fool takes in all the lumber of every sort that he comes across, so that the knowledge which might be useful to him gets crowded out, or at best is jumbled up with a lot of other things, so that he has a difficulty in laying his hands upon it.

Now the skillful workman is very careful indeed as to what he takes into his brain-attic. He will have nothing but the tools which may help him in doing his work, but of these he has a large assortment, and all in the most perfect order.

It is a mistake to think that that little room has elastic walls and can distend to any extent. Depend upon it there comes a time when for every addition of knowledge you forget something that you knew before. It is of the highest importance, therefore, not to have useless facts elbowing out the useful ones.”
​
~Sherlock Holmes, A Study in Scarlet, by Arthur Conan Doyle, 1887.

Once upon a time, in pre-writing cultures, remembering was everything. A trained memory was not just a handy tool, but a fundamental facet of any worldly mind. How we perceive the world and how we act in it are products of how and what we remember. Some biologists suggest that most animal behavior is essentially a bundle of habits shaped by memories. To the extent that we as humans control our lives, we do so by gradually altering those habits, which is to say the networks of our memory.

Our ability to meet and remember new people, to make connections between previously unconnected notions, to create new ideas, to share in a common culture: All these essentially human acts depend on memory.
​

Consider it this way:
The present is a split second, so tiny and trivial as to be immaterial.
Everything else, everything real and substantial,
is a coral reef of dead split seconds,
forming the islands and continents of our reality.

Every moment is a brick in the wall of the past,
building enormous structures that have identity and meaning,
cities we live in.

The future is wet shapeless clay,
the present is so brief it barely exists,
but the past houses and shelters us,
gives us a home and a name;
and the mortar that binds those bricks,
that stops them from sliding apart into a nettle-shrouded ruin,
is memory.
​--K. J. Parker
​

The Science of Memory

The brain is a mutable organ, capable—within limits—of reorganizing itself and readapting to new kinds of sensory input, a phenomenon known as neuroplasticity. Though there is disagreement about just how many memory systems there are, scientists generally divide memories broadly into two types: declarative and nondeclarative (sometimes referred to as explicit and implicit).
Based on recording the brain activity of volunteers via MRI (Magnetic Resonance Imaging) as they perform different memory tasks in experiments, this is our present understanding of the physical activity of memory in the human brain:

Declarative memories are things you know you remember, like the color of your house, or what happened yesterday afternoon. They seem to pass through short-term memory in the prefrontal cortex and create activity in the hippocampal region to be consolidated and stored. 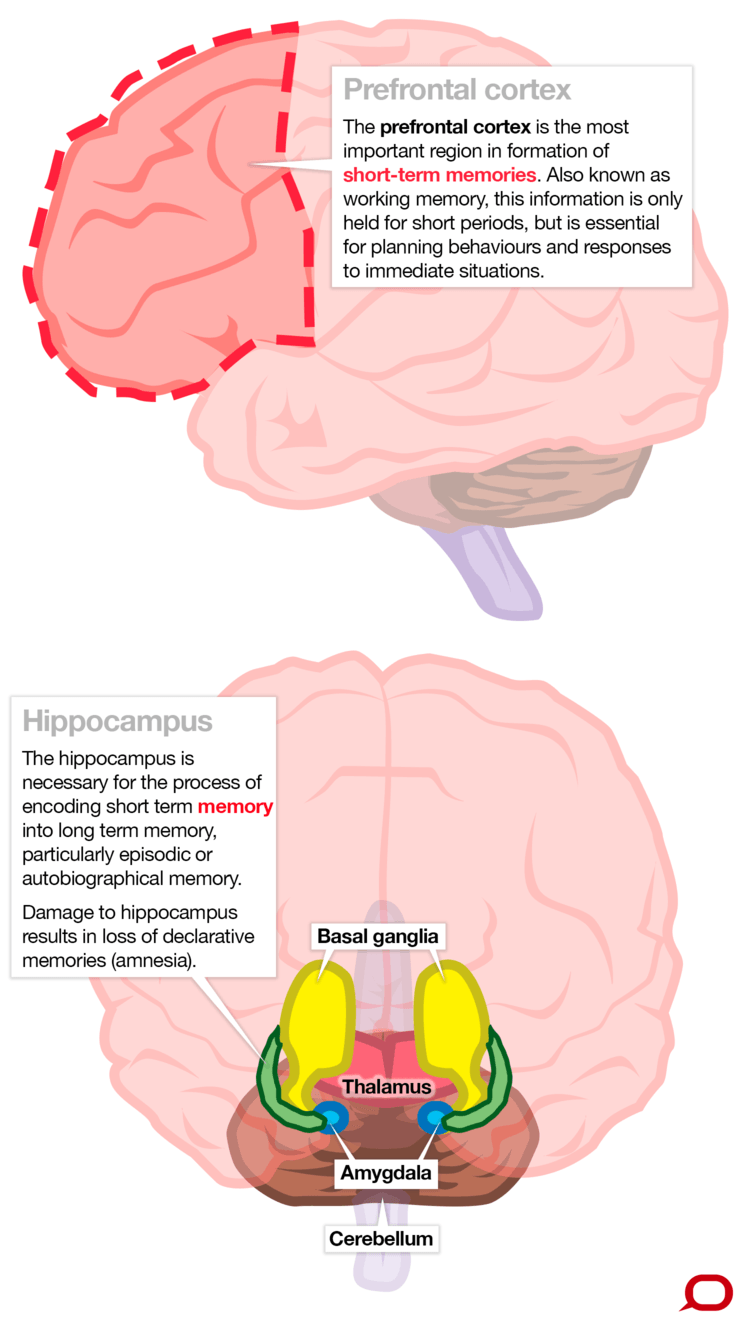 http://theconversation.com/were-capable-of-infinite-memory-but-where-in-the-brain-is-it-stored-and-what-parts-help-retrieve-it-63386
Within the category of declarative memories, psychologists make a further distinction between semantic memories, or memories for facts and concepts, and episodic memories, or memories of the experiences of our own lives.  These two different types of remembering seem to make use of different neural pathways, and rely on different regions of the brain, though both are critically dependent on the hippocampus and other structures within the medial temporal lobes.
​
http://theconversation.com/were-capable-of-infinite-memory-but-where-in-the-brain-is-it-stored-and-what-parts-help-retrieve-it-63386

Nondeclarative memories are the things you know unconsciously, like how to ride a bike or how to draw a shape while looking at it in a mirror (or what a word flashed rapidly across a computer screen means). Those unconscious memories don’t seem to pass through the same short-term memory buffer as declarative memories, nor do they depend on the hippocampal region to be consolidated and stored. They rely primarily on different parts of the brain. Motor skill learning takes place largely in the cerebellum, perceptual learning in the neocortex, habit learning in the basal ganglia. 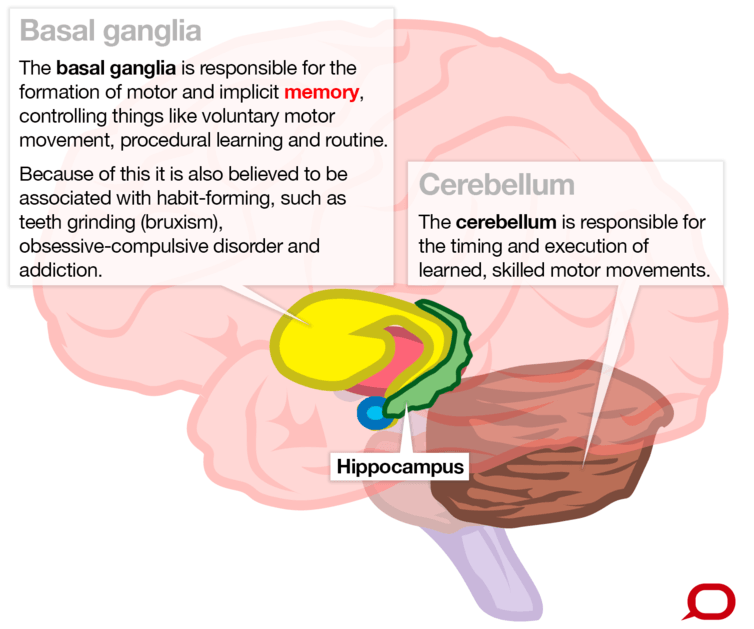 ​Improving Memory Skills for Study, Presentations, and the Joy of Creativity

Based on our present understanding of the science of brain structure and the foundations of memory, we can practice skills to improve our memory for tasks that students often find difficult. Follow the links below to pages about--

The Major System for Number Series and Dates
​