By Justin Worland | Photographs by Christopher Gregory for TIME
June 13, 2019
​The Leaders of These Sinking Countries Are Fighting
to Stop Climate Change.
Here's What the Rest of the World Can Learn. 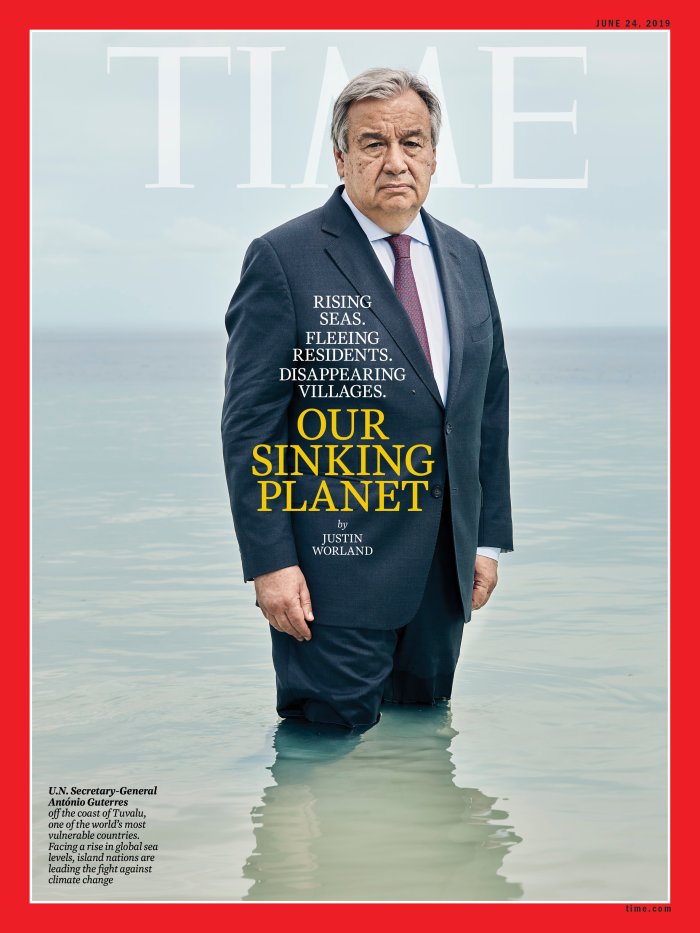 ​The journey to the Fijian village of Vunidogoloa is arduous. It requires a flight across the Pacific to the nation’s remote international transit hub, a 140-mile connection on a rickety 19-seat plane to a smaller island, an hourlong drive past other rural villages and finally a short walk guided by a man with a machete to reach a ghost town forced into retreat by climate change and the rising seas that come with it.

Once home to more than 100 people, Vunidogoloa has been overrun by the tropical forest. Plants cover the town square. The stench of rotting rodents wafts from abandoned homes, and salt water seeps up through the soil as far as 300 ft. from Natewa Bay. This Saturday morning in mid-May is warm and pleasant, but a few times a year, king tides inundate the village with knee-high waters; locals were forced to place precious possessions on tall surfaces and run for the hills. “All the rights of living,” says Sailosi Ramatu, the village’s administrator, “had been lost because of climate change.”

And so, five years ago, Vunidogoloa was abandoned. The Fijian government built a new town about a mile up the hill at a cost of half a million dollars. Vunidogoloa is the first place in Fiji to relocate because of the effects of climate change, but it won’t be the last. Prime Minister Frank Bainimarama tells me he plans to move 40 Fijian villages in the coming years to cope with rising sea levels, which globally climbed about 7.5 in. in the 20th century and could rise 3 ft. more by the end of the 21st, according to the U.N.’s climate-science arm. “Every day I think about climate change,” he says. 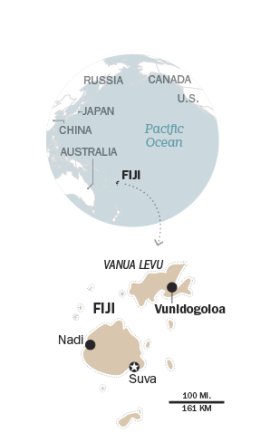 ​The relocation of villages like Vunidogoloa foreshadows the existential threat a changing and unsettled climate poses to a handful of small nations. Intense storms and flooding have pounded Fiji’s islands, leaving the country to anticipate losing assets worth 5% of its GDP each year, a number expected to grow in the coming decades.

Some years will be worse: in 2016, when Tropical Cyclone Winston hit, that figure ballooned to 20%. The constant turbulence has imperiled industry and choked off the food supply in Fiji; other island nations like Tuvalu, Kiribati and the Marshall Islands could face even worse in the coming century, scientists say, with sea-level rise threatening to wipe them off the map entirely.

To save themselves and raise awareness of the perils of climate change, a collection of these vulnerable states—from Fiji to the Marshall Islands, the Maldives to the Bahamas—has launched an international campaign. It has been, against all odds, a remarkable success. Together, these mostly poor nations with little hard power leveraged the moral force of their peril to shape the global 2015 Paris Agreement.
​
They helped inspire hundreds of billions of dollars in financial commitments for the developing world from richer countries. They spurred the creation of last year’s Intergovernmental Panel on Climate Change (IPCC) report that upended the climate debate. And they helped save complex international climate talks from collapse.

These success of these countries offers a broader lesson: no one nation can solve a problem as complex as climate change alone, but together bands of nations can make a difference. And that lesson applies to a host of global challenges, from emerging diseases to international terrorism and the spread of nuclear weapons. As states around the world turn inward in response to rising populism, the tiny island nations are showing that international institutions remain not only relevant but also necessary to address the toughest challenges of our generation.
“Climate change offers an opportunity for multi­lateralism to prove its value,” says U.N. Secretary-General António Guterres, who traveled to Fiji and other Pacific island nations in May to meet with leaders there.

That test is anything but theoretical for the bellwether states that dot the Pacific. Global average temperatures have risen so rapidly—already 1°C since the beginning of the industrial era—that the very existence of these nations is in doubt. The IPCC study released last fall suggests that some may not survive if temperature increase tops 1.5°C by the end of this century.

In mid-May, leaders of island nations from across the Pacific gathered in Fiji to plot their next big step: coordinating a push to make developed countries commit to aggressive new targets for reducing their emissions at a global climate summit to be convened by the U.N. in New York this fall. The goal: make the world respond to the urgency of climate change. If they fail, they will likely not be the last to go. But not all successes are created equal. Indeed, it may be their loss that finally rouses the world to the stakes of the challenge.

The islands’ impact on climate discussions has only grown since. Fiji brought top officials to Fiji to see the ravages of climate change firsthand. Fiji developed a plan to coax its peers into supporting the aggressive measures the region’s survival requires. Fiji pioneered a program called the “Talanoa Dialogue,” the name for the national tradition of listening and sharing. Instead of shaming countries that failed to live up to their climate promises, the Fijians stressed to them the urgency of the challenge. It was a strategic decision intended to build bridges at a time when other leaders seemed eager to burn them.

No matter how mighty their efforts, the fate of the world’s most vulnerable communities is still largely out of their hands. The world remains on track for more than 3°C of warming if countries implement only their current plans, according to a December 2018 analysis from Climate Action Tracker. With populist leaders around the globe threatening to reverse their predecessors’ work on climate, it remains unclear whether countries will even follow through with those modest plans. If communities like Vunidogoloa are to be saved, others will need to help.
​
It would be easy to view the islands as distant lands with distant challenges. But their tragedy may soon be ours. Vunidogoloa sits on a beach that coastal erosion has chipped away for at least a half-century, and the porous soil makes the area particularly vulnerable to flooding. Miami’s permeable limestone subsurface exposes the great U.S. city to the same peril. New Orleans and Houston already face the threat of supersized storms that will only get worse with time.

Outside the U.S., Osaka sits just a few feet above sea level, some of Australia’s biggest cities reside in a state with frequent drought, and several European hubs regularly face crippling floods when there’s too much rain. We can sit and watch small Pacific islands disappear­—but who do we think will be hit next?
​

This isn’t lost on those nations’ leaders. Their fate is ours foretold, they tell anyone who will listen. “What we are trying to tell the world is that when we go down, all the cities will go down too,” says Tuilaepa Malielegaoi, the Prime Minister of Samoa. “We are arguing also for the safety of the people of the world.” The rest of the world would be well served to listen.