Presentations, Poetry, Quotations,
​and Acting on Stage or Film 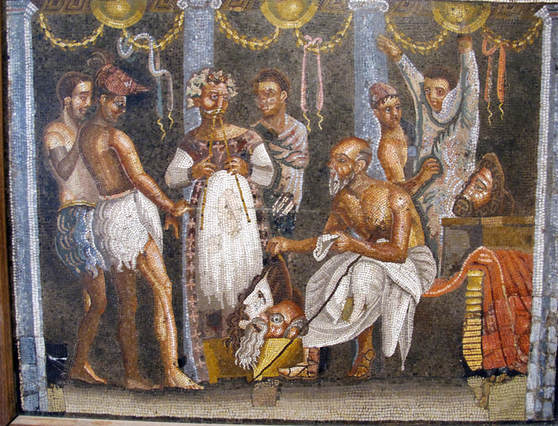 Mosaic from the house of the tragic poet, Pompeii, Italy
I believe that they who wish to do easy things without trouble and toil must previously have been trained in more difficult things. --Rhetorica ad Herennium
Learning to speak well in front of an audience is worth doing not because it’s easy but because it’s hard. When we commit something to memory under the pressure to explain it to others, we absorb it more fully into our mental model of the world. Memory was the foundation for rhetorical performances so treasured by the Greeks and Romans. But rote memorization and repetition were not solely what they had in mind. The art of memory was taught as a species of performance, something done in real time according to well-practiced routines. The very foundation of memory itself was understood to be emergent and performative—not fixed and forever, but coming into being under specific circumstances.

The question of how best to memorize a piece of text, or a speech, has vexed mnemonists for millennia. The earliest memory treatises described two types of recollection: memoria rerum and memoria verborum, memory for things and memory for words. When approaching a text or a speech, one could try to remember the gist, or one could try to remember verbatim.

The Roman rhetoric teacher Quintilian looked down on memoria verborum on the grounds that creating such a vast number of images was not only inefficient, since it would require a gargantuan memory palace, but also unstable. If your memory for a speech hinged on knowing every word, then not only did you have a lot more to remember, but if you forgot a single word, you could end up trapped in a room of your memory palace staring at a blank wall, lost and unable to move on.

Cicero agreed that the best way to memorize a speech is point by point, not word by word, by employing memoria rerum. In his De Oratore, he suggests that an orator delivering a speech should make one image for each major topic he wants to cover, and place each of those images at a locus. Indeed, the word “topic” comes from the Greek word topos, or place (the phrase “in the first place” is a vestige from the art of memory).


The principles that the oral bards discovered, as they sharpened their stories through telling and retelling, were the same basic mnemonic principles that psychologists rediscovered when they began conducting their first scientific experiments on memory around the turn of the twentieth century:

The variability that is built into the poetry of oral traditions allows the bard to adapt the material to the audience, but it also allows more memorable versions of the poem to arise.

Many actors will tell you that they break their lines into units they call “beats,” each of which involves some specific intention or goal on the character’s part, which they train themselves to empathize with. This technique, known as Method acting, was pioneered in Russia by Konstantin Stanislavski around the turn of the last century.