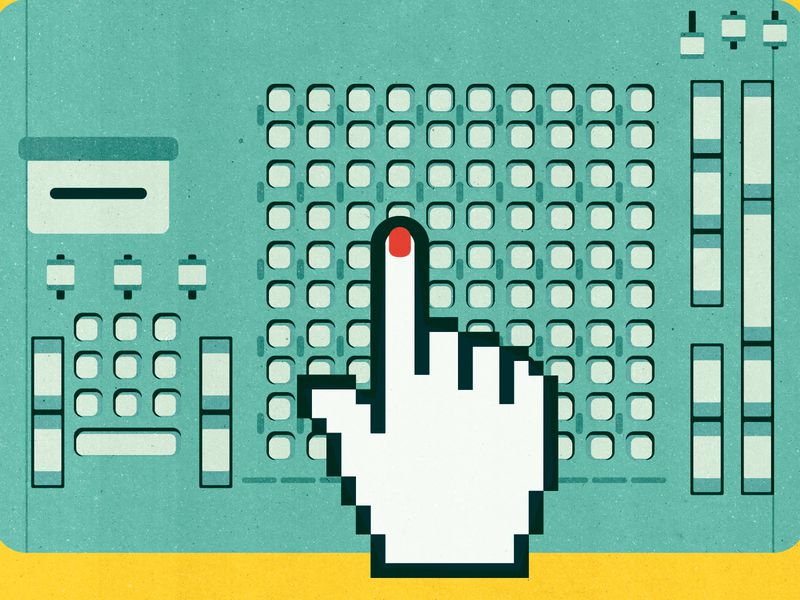 The Gendered History of Human Computers


Women were involved with the computing field from its earliest days.

​Tracy Chou is a 31-year-old programmer—and “an absolute rock star,” as her former boss Ben Silbermann, the CEO and co-founder of Pinterest, once gushed to me.


She’s a veteran of some of Silicon Valley’s biggest names. She interned at Google and Facebook, then was an early hire at the question-answering site Quora, where she coded key early features, like its ranking algorithm and its weekly emailer software. At Pinterest, she helped overhaul the entire code base, making the service speedier and more reliable. These days, she’s the founder of Block Party, a start-up making tools to help social-media users deal with harassment.


Yet for all her street cred, Chou still finds herself grappling with one of the biggest problems in the industry: Female programmers are regarded skeptically, and sometimes even treated with flat-out hostility.

She’s seen the same patterns of behavior personally during her decade in coding: colleagues who doubt women’s technical chops, or who muse openly about whether women are biologically less wired to be great programmers. She has watched as women linger in jobs while men of equal or lesser ability get promoted; at other firms, she’s heard of tales of flat-out harassment, including on-site propositions for sex. Chou’s even subject to skepticism herself: Recently she was trying to hire a coder for her new start-up, when the guy accidentally sent her a diary in which he’d meticulously written complaints about her skills.

“He felt I was immature and awkward and very sensitive, and not good with people—in over my head,” she says. And this from a guy trying to get her to hire him.

Not everyone in the field is antagonistic to women, of course. But the treatment’s bad enough, often enough, that the number of women coders has, remarkably, regressed over time, from about 35 percent in 1990 to 26 percent in 2013, according to the American Association of University Women.

Chou and others are working hard to change things. She has co-founded groups like Project Include that encourage diversity in computer science, while another initiative lobbies venture capital firms to set up anti-harassment policies. “I think we’re getting better, but very slowly,” Chou tells me.

There’s a deep irony here—because women were in computing from its earliest days. Indeed, they were considered essential back when “computers” weren’t even yet machines. Just before the digital age emerged, computers were humans, sitting at tables and doing math laboriously by hand. Yet they powered everything from astronomy to war and the race into space. And for a time, a large portion of them were women.

Read more: https://www.smithsonianmag.com/science-nature/history-human-computers-180972202/#k8VxXOpZ4LzmevDI.99
Give the gift of Smithsonian magazine for only $12! http://bit.ly/1cGUiGv
Follow us: @SmithsonianMag on Twitter
The rise of human computers began in the early hunt for Halley’s comet. The astronomer Edmond Halley had predicted that the celestial body would return and that the laws of gravity could predict precisely when. But those calculations would be too complex and brutal a task for any single astronomer.

So the French mathematician Alexis-Claude Clairaut decided to break the work up—by dividing the calculations among several people. In 1757, he sat down with two friends, the young astronomer Jérôme-Joseph Lalande and Nicole-Reine Lepaute, a clockmaker’s wife with a penchant for numbers. At the time, women had little opportunity in science, but Lalande “loved women, especially brilliant women, and promoted them in both word and deed,” the historian Ken Alder has written. After arduous weeks of cranking away, the trio predicted that the comet’s closest approach to the sun would be between March 15 and May 15 the next year. They were slightly off—the comet rounded the sun on March 13, two days early—but it was the most accurate forecast yet. The age of human computers began.

And not a moment too soon. By the 19th century, scientists and governments were beginning to collect reams of data that needed to be processed, particularly in astronomy, navigation and surveying. So they began breaking their calculations down into tiny basic math problems and hiring gangs of people to solve them. The work wasn’t always hard, though it required precision and an ability to work for long hours. Mostly, the computers were young men.

But by the late 19th century, some scientists realized that hiring women could reduce the cost of computation. The growth of education and middle-class prosperity had produced a generation of young women trained in math. So when the Harvard Observatory decided to process years of astronomic data it had gathered using its telescope, it assembled one all-female team of computers. They could be paid as little as less than half of what men got, notes David Alan Grier, author of When Computers Were Human.

“By supply and demand and all the other nasty things, they can hire them more cheaply than men,” Grier says. “And the chief observer brags about it!”

During World War I, the Army hired a small group of women to calculate artillery trajectories. In the 1930s, the Works Progress Administration began hiring its own human calculators to support engineers. Women were welcome as computers partly because the work was viewed as a dull, low-status activity. Men with elite educations generally wanted no part in it. Not only were women hired, but so were blacks, polio survivors, Jews and others who were routinely iced out of job opportunities, Grier points out.
​
“The reason that these pre-electronic computation jobs were feminized is they were seen as rote and de-skilled,” says Mar Hicks, a historian and author of Programmed Inequality. It wasn’t true, though: “In a lot of cases, the women doing these computation jobs actually had to have pretty advanced math skills and math training, especially if they were doing very complex calculations.”

The work could require superhuman endurance, though. “They had to keep working eight hours a day doing the same equation over and over again—it must have been mind-numbing,” notes Paul Ceruzzi, author of Reckoners: The Prehistory of the Digital Computer. Decades later, one human computer—Marilyn Heyson—recalled the job as intellectually interesting, but a marathon. “I had moments when I said, ‘Did I go to college for this job?’” she told Sarah McLennan, an assistant professor at Virginia State University.


In World War II, the need for computation exploded. Over 200 women were hired at the University of Pennsylvania’s Moore School of Electrical Engineering, creating artillery-trajectory tables for the Army. By 1944, as Grier documents, about half of all computers were women. One contractor of the Applied Mathematics Panel used the term “kilo­girl” to refer to 1,000 hours of female calculation work. Another astronomer spoke of “girl-years” of work.


Few expected that computing would lead to a career, though. The idea was, mostly, to use the women before they married. Astronomer L. J. Comrie wrote a 1944 Mathematical Gazette article entitled “Careers for Girls,” in which he declared that female computers were useful “in the years before they (or many of them) graduate to married life and become experts with the housekeeping accounts!”

​After the war ended, the space race was on, and it had a ravening need for computation—crunching numbers on projects like wind-tunnel tests of wings. The National Advisory Committee for Aeronautics, or NACA (the precursor to NASA), hired several hundred women as computers at its Langley base in Virginia, the historian Beverly Golemba estimated. NACA and NASA were relatively progressive employers, paying the young women far better than they’d get in other forms of office work; they even employed married women with children. 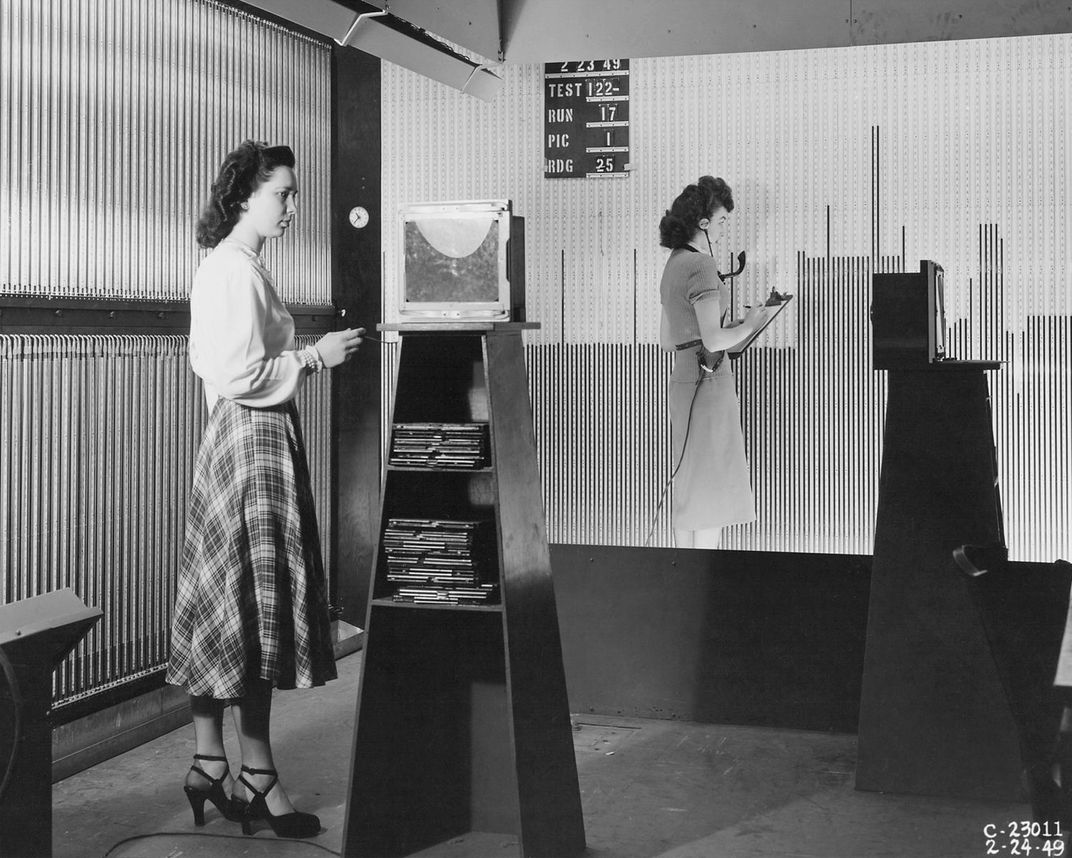 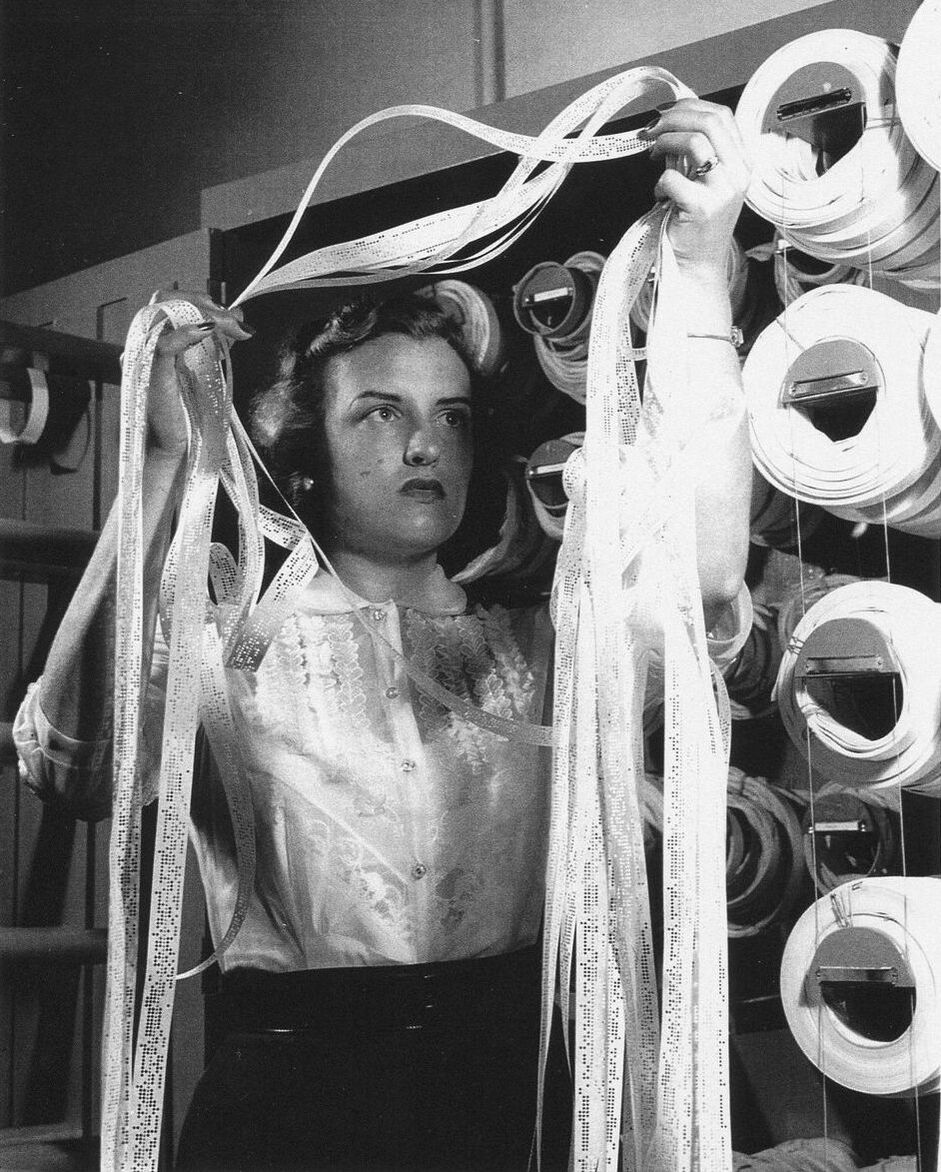 One woman who stumbled into the field in the late 1950s was Sue Finley. “I loved math,” she tells me. She studied logic in college and was disenchanted with the sales and typing jobs on offer after she graduated. One day, while applying at an engineering firm, she was offered work as a computer, and found joy in its rigor and puzzle-solving. Later, she landed a computing job with NASA’s Jet Propulsion Laboratory, where she labored all day using a clattering, breadbox-size electric Friden calculating machine.

It was, she says, a remarkably egalitarian oasis in 1950s America. “The engineers, the male engineers, always listened to us,” she notes.

At its bases, NASA employed nearly 80 black women as computers, says Margot Lee Shetterly, author of Hidden Figures. One of them, Katherine Johnson, was so revered for her abilities that in 1962, John Glenn asked her to personally verify the flight path of his first launch into space on the Friendship 7 mission. The astronauts didn’t trust the newfangled digital computers, which were prone to crashing. Glenn wanted human eyes on the problem.
“They had a tremendous amount of respect for these women and their mathematical abilities,” says Shetterly. “The male engineers often were not good mathematicians. So the women made their work possible.” Still, some friction existed. Women who asked for promotions got stonewalled or turned down: “For women who wanted to move up, who wanted to be supervisors—particularly if that involves supervising men? Not so much.” 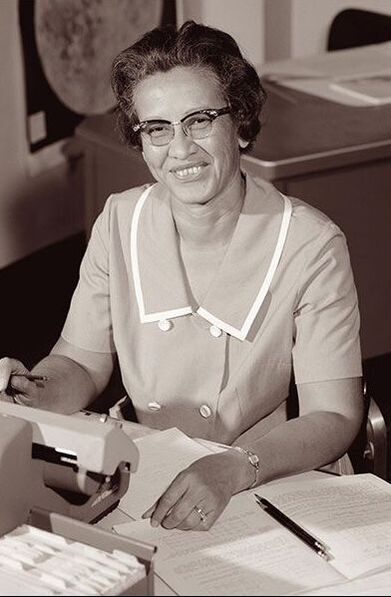 ​Soon, the human computers faced an even more existential threat: digital computers, which promised to work with far greater speed and to handle complex math—like inverting a 10x10 matrix—beyond the ken of even the most adroit human with a pencil.

Women, though, were among the original coders of these strange new digital brains, because in the early days programming, too, was seen as dull work. The earliest programmers for the Eniac—the military-funded first programmable general-purpose computer—were entirely women, plucked from the ranks of the Army’s human computers. And though they wound up inventing brilliant coding techniques, they received none of the glory: When the Army showed off the Eniac to the press, running lightning-fast ballistics-crunching algorithms, it didn’t introduce the women who’d written the code.

By the ’60s and ’70s, human computation was dying. But some women made the transition to the new world of software—including Sue Finley. After taking a weeklong course on the language Fortran, she began a decades’ long career coding on NASA’s space missions, including software that tracked probes to Venus. At 82, she remains at work as an engineer in the Deep Space Network; she also works on entry, descent and landing of spacecraft and still thrills to the mental challenge of debugging some gnarly problem in the code that peers into space.
​
“It’s a mystery, solving a mystery,” she tells me. “It’s fun when it’s successful.” 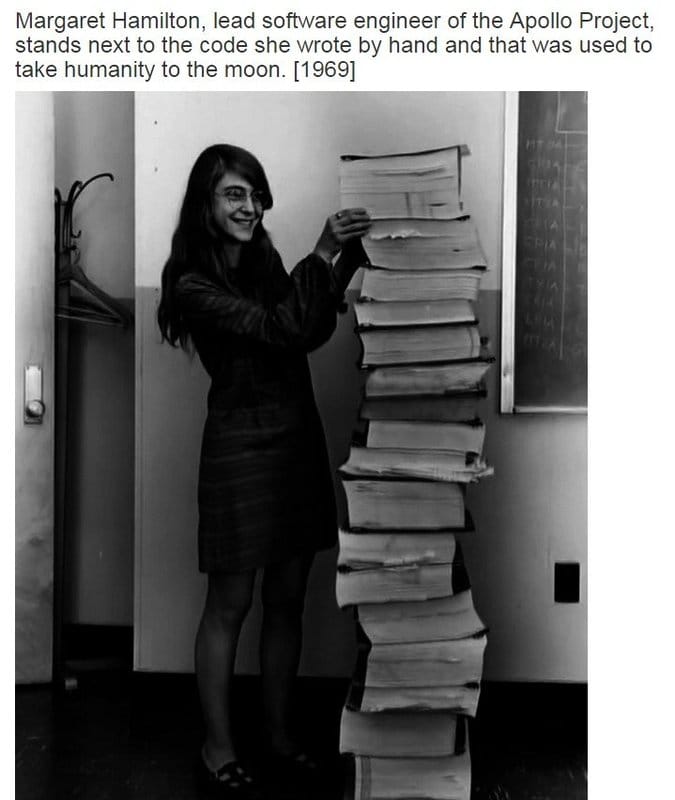 ​In one sense, the story of female computers stands in appealing contrast to the difficulties faced by women in coding today. After all, even in the more straightforwardly sexist decades of the 19th and early 20th centuries, women were accepted and even sought out for their skills. Why is it worse now? Finley sometimes talks to young women in software, and is appalled by their tales of harassment and having their work denigrated.

Research by Sue Gardner, the former head of the Wikimedia Foundation, has found that women in the software industry often leave in mid-career; they start off excited and happy, but after a decade are ground down. Finley understands. “Why would anybody want to work in those circumstances or go into that field?” she asks rhetorically.

Though women programmers have made strides in some fields—such as “front-end” programming, for browser applications—the salaries in those specialties tend to be lower overall, simply because the industry regards anything being done by women as easy, according to Miriam Posner, an assistant professor of computer science at UCLA. It is becoming a pink-collar ghetto in coding, Posner notes, rather like the status of female human computers.
​
Tracy Chou is cautiously optimistic. There’s certainly more conversation these days in Silicon Valley about the need to hire and promote women as readily as men. “Hopefully, some of the public posturing does end up forcing people to do something,” she says wryly. Calculations can be solved once and for all; social problems are harder.