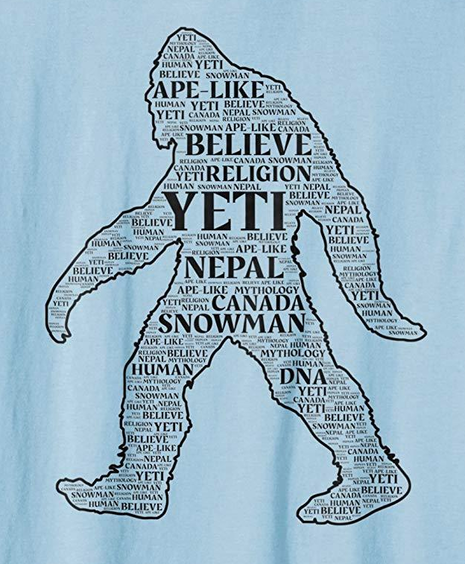 ​What ideas or questions does this cryptozoological mystery generate in your mind?

What topic would you identify as worthy of further investigation?

After some initial research, what issues might present themselves?

​As you develop a personal belief, position, or conviction about the issue, how would you express that message with supporting details to an audience? 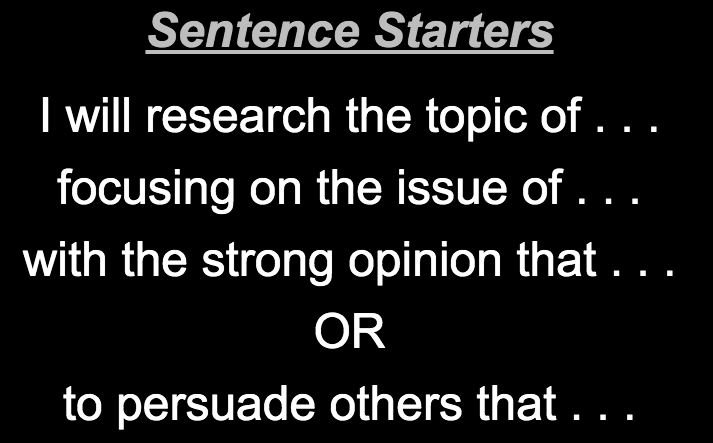 Why Do So Many People Still Want to Believe in Bigfoot?

By Ben Crair
SMITHSONIAN MAGAZINE, September 2018
​
​Sixty years ago this fall, Bigfoot first stepped into the public consciousness. “Giant footprints puzzle residents,” a headline in the Humboldt Times announced. The small Northern California newspaper reported that a road construction crew had discovered humanlike footprints that were a massive 16 inches long. The paper was the first to give the mysterious animal that made the prints its memorable moniker—“Bigfoot”—and the creature has been stomping through the American imagination ever since. 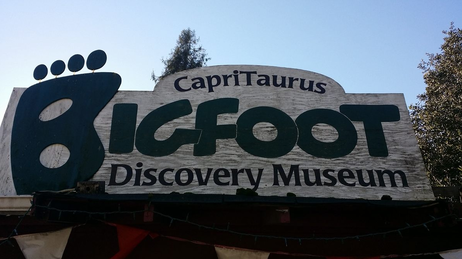 Today, the legendary beast seems to be everywhere: You will find Bigfoot looking awfully cute this year in two children’s films: The Son of Bigfoot and Smallfoot. Animal Planet recently aired the finale of its popular series “Finding Bigfoot,” which lasted 11 seasons despite never making good on the promise of its title. And the Bigfoot Field Researchers Organization lists at least one report from every state, except Hawaii, over the past two decades. The most recent sighting, in June 2018, was by a woman in Florida who reported a creature that looked like “a large pile of soggy grass.” Other evidence in the database includes supposed Bigfoot scat, nests and noises. If a tree falls in the forest and no one is around to hear it, it may not make a sound—but it seems someone will report that a Bigfoot knocked it over.
​
“Interest in the existence of the creature is at an all-time high,” the paleontologist Darren Naish has observed, even though “there’s nothing even close to compelling as goes the evidence.”
​
Of course, Bigfoot is not the first fabled hominid to roam North America. Sasquatches long populated the mythologies of American Indian tribes in the Pacific Northwest, but those 1958 footprints transformed the myth into a media sensation. The tracks were planted near Bluff Creek in Northern California by a man named Ray Wallace—but his prank was not revealed until his death in 2002, when his children said it had all been “just a joke.”
​
By that point, more important evidence had entered the Bigfoot file. In 1967, Roger Patterson and Bob Gimlin filmed a few seconds of a hairy creature walking on two legs by the same Bluff Creek—the most famous and contested piece of Bigfoot “evidence” to this day. That the Patterson-Gimlin film was created in the same place that Wallace had staged his hoax is just one reason to doubt its authenticity. Skeptics say the animal was a man in costume, while believers argue that the creature’s movements and body proportions cannot possibly have been human. The debate has been raging for half a century, which raises a question of its own. “How is it that the evidence has not gotten any better despite the exponential increase in the quantity and quality of cameras?” asks Benjamin Radford, a research fellow with the Committee for Skeptical Inquiry.
​
Still the absence of evidence is not evidence of absence either. Wild animals don’t exactly mug for photos, and the planet’s ever-shrinking forests still regularly unpack surprises, such as the saola, an untamed cousin of the cow that was discovered by scientists in Vietnam in 1992. But the saola did not have legions of amateurs hunting it with cameras. With or without hard evidence, many people clearly want to believe in Bigfoot. Which suggests we are dealing more with human imagination than human evolution.
​
Naish has written that Bigfoot is the modern American “manifestation of a human-wide cultural concept, not a zoological reality.” It has much in common with the Australian yowie and the Himalayan yeti: an upright posture, shaggy hair and, of course, large feet. As so-called wild men, they hold a crude mirror up to our own species: What might Homo sapiens be like if civilization had not removed it from nature?

Some people see these cryptohominids as symbols of pure freedom, living by instinct and foiling every effort to pin them down. To search for Bigfoot in the forest is to taste that freedom. On the trail, you become extra-attuned to nature: the smell of scat, the sounds of breaking branches, the curious impressions in the dirt. As long as there are wild places in America, Bigfoot remains a possibility that, to its most ardent proponents, cannot be disproved.

The hunt for Bigfoot emulates an earlier mode of discovery, when new knowledge was not the product of advanced degrees and expensive machinery but rather curiosity, bravery, patience and survival. In the 19th century, the American landscape revealed its majesties to ordinary settlers pushing westward into territory unmapped by Europeans. To track Bigfoot today is to channel that frontier spirit (as well as to appropriate Native American traditions).

Bigfoot also embodies other less romantic but no less enduring American traits, like gullibility and a hunger for attention. “There are so many fake videos,” says Loren Coleman, the founder of the International Cryptozoology Museum in Portland, Maine. The problem has grown worse with social media, where viral hoaxes, like drone footage of a supposed Bigfoot in a clearing in Idaho, can rack up millions of views. Coleman, for his part, believes there is evidence for Bigfoot’s existence, but he and his like-minded peers find it difficult to focus attention on this material amid the growing number of obvious shams. “Technology has ruined the old cryptozoology,” Coleman says.

His complaint echoes concerns in more mainstream American life, where technologies that promised to build consensus have, in fact, made the truth more difficult than ever to discern. On the internet, Bigfoot has found a habitat much more hospitable than North American forests. It turns out that Bigfoot does not need to exist in order to live forever.
​ 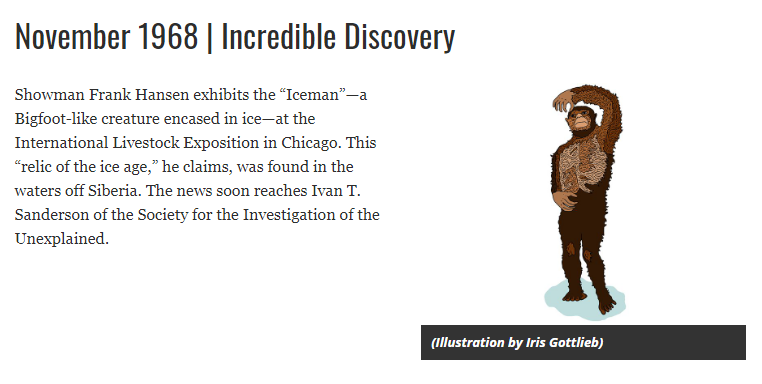 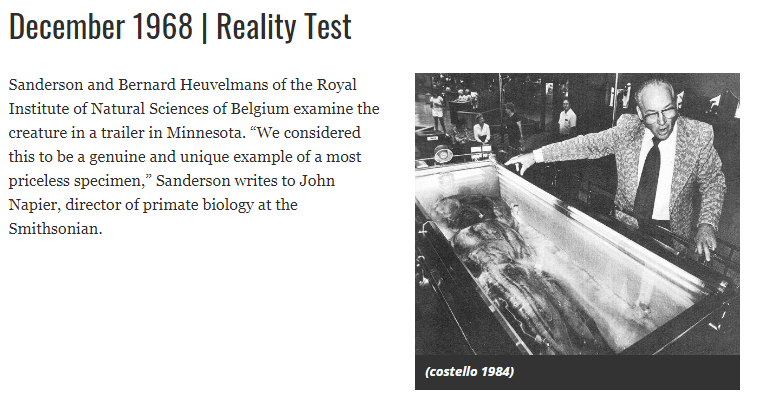 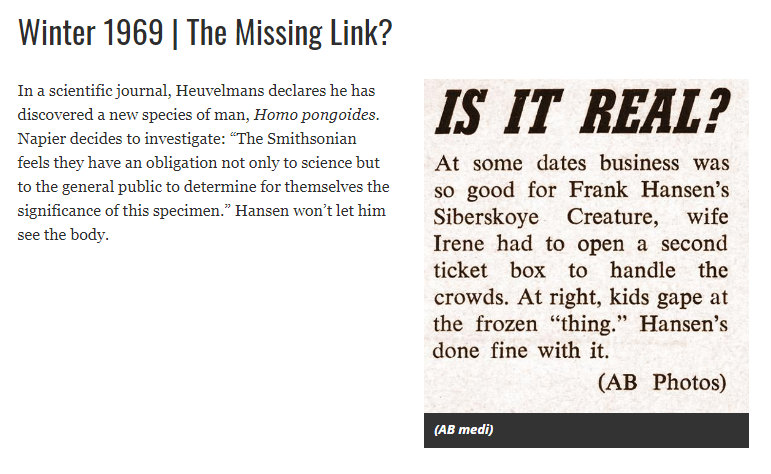 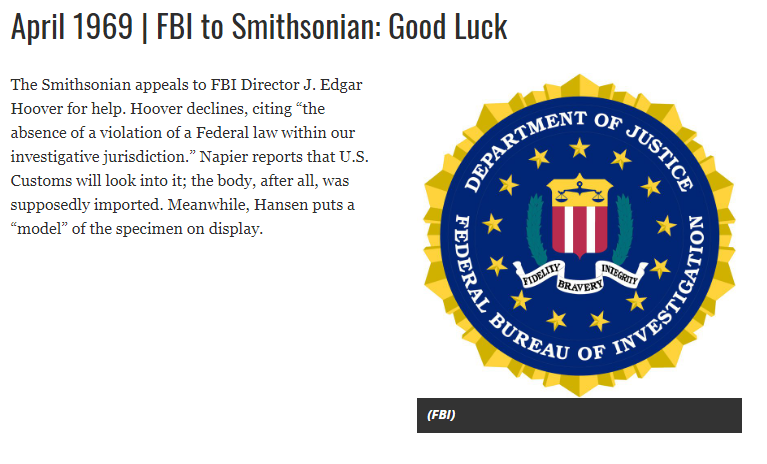 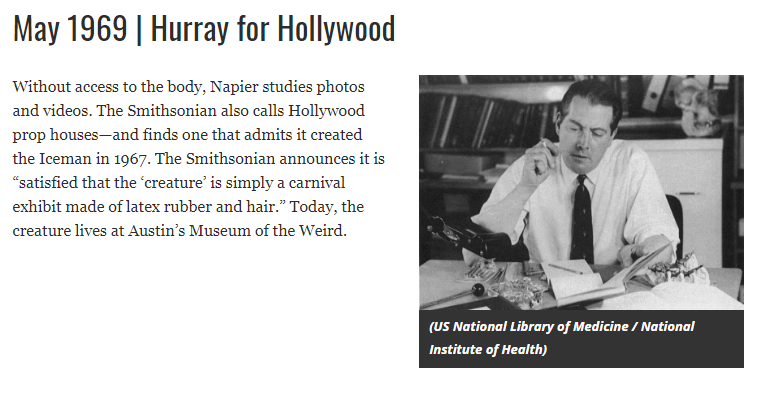