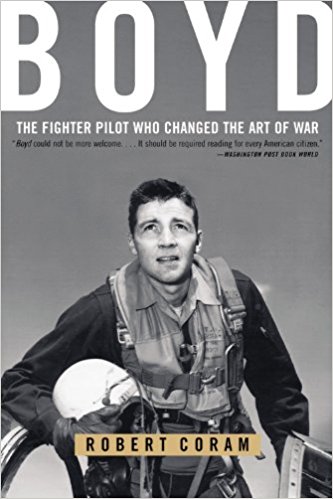 Observe-Orient-Decide-Act:
What You Can Learn from Fighter Pilots About Making Fast and Accurate Decisions

by Robert Coram
​Developed by strategist and U.S. Air Force Colonel John Boyd, the OODA loop is a practical concept designed to be the foundation of rational thinking in confusing or chaotic situations. OODA stands for Observe, Orient, Decide, and Act.
Boyd developed the strategy for fighter pilots. However, like all good mental models, it can be extended into other fields.

Fighter pilots have to work fast. Taking a second too long to make a decision can cost them their lives. Pilots have a lot of decisions and processes to juggle when they’re in dogfights (close-range aerial battles). Pilots move at high speeds and need to avoid enemies while tracking them and keeping a contextual knowledge of objectives, terrains, fuel, and other key variables. Dogfights need to be over as quickly as possible. The longer they go, the higher the chances that something goes wrong. Pilots need to rely on their creativity and decision-making abilities to survive. There is no game plan to follow, no schedule or to-do list. There is only the present moment when everything hangs in the balance.

Boyd spent his career observing people and organizations. How do they adapt to changeable environments in conflicts, business, and other situations? Over time, he deduced that these situations are characterized by uncertainty. Dogmatic, rigid theories are unsuitable for chaotic situations.
​

The Four Parts of the OODA Loop

OODA stands for Observe, Orient, Decide, Act. The description of it as a loop is crucial. Boyd intended the four steps to be repeated again and again until a conflict finishes. Although most depictions of the OODA loop portray it as a superficial idea, there is a lot of depth to it.

The first step in the OODA Loop is to observe. At this stage, the main focus is to build a comprehensive picture of the situation with as much accuracy as possible.

A fighter pilot needs to consider: What is immediately affecting me? What is affecting my opponent? What could affect us later on? Can I make any predictions, and how accurate were my prior ones? A pilot's environment changes rapidly, so these observations need to be broad and fluid.

And information alone is not enough. The observation stage requires awareness of the overarching meaning of the information. It also necessitates separating the information which is relevant for a particular decision from that which is not. You have to add context to the variables.

Orientation, the second stage of the OODA loop, is frequently misunderstood or skipped because it is less intuitive than the other stages. Boyd referred to it as the schwerpunkt, a German term which loosely translates to “the main emphasis.” In this context, to orient is to recognize the barriers that might interfere with the other parts of the process.
Without an awareness of these barriers, the subsequent decision cannot be a fully rational one. Orienting is all about connecting with reality, not with a false version of events filtered through the lens of cognitive biases and shortcuts.

Having gathered information and oriented ourselves, we have to make an informed decision. The previous two steps should have generated a plethora of ideas, so this is the point where we choose the most relevant option.
​
Boyd cautioned against first-conclusion bias, explaining that we cannot keep making the same decision again and again. This part of the loop needs to be flexible and open to updating. In some of his notes, Boyd described this step as the hypothesis stage. The implication is that we should test the decisions we make at this point in the loop, spotting their flaws and including any issues in future observation stages.
​

While technically a decision-making process, the OODA loop is all about action. The ability to act upon rational decisions is a serious advantage.
​
The other steps are mere precursors. A decision made, now is the time to act upon it. Also known as the test stage, this is when we experiment to see how good our decision was. Did we observe the right information? Did we use the best possible mental models? Did we get swayed by biases and other barriers? Can we disprove the prior hypothesis? Whatever the outcome, we then cycle back to the first part of the loop and begin observing again.
​

Three key principles supported Boyd’s ideas. In his presentations, he referred to Gödel’s Proof, Heisenberg’s Uncertainty Principle, and the Second Law of Thermodynamics.
Gödel’s incompleteness theorems indicate that any mental model we have of reality will omit certain information and that further observations must be used to bring it in line with reality. Our understanding of science illustrates this.
​
In the past, people’s conception of reality missed crucial concepts such as the laws of thermodynamics and gravity. As we have discovered these concepts, we have updated our view of the world. Yet we would be foolish to think that we now know everything and our worldview is complete. Other key principles remain undiscovered.

The same goes for fighter pilots — their understanding of what is going on during a battle will always have gaps. Identifying this fundamental uncertainty gives it less power over us.
​

The second concept Boyd referred to is Heisenberg’s Uncertainty Principle. In its simplest form, this principle describes the limit of the precision with which pairs of physical properties can be understood. We cannot know the position and the velocity of a body at the same time. We can know either its location or its speed, but not both.

Although Heisenberg’s Uncertainty Principle was initially used to describe particles, Boyd’s ability to combine disciplines led him to apply it to planes. If a pilot focuses too hard on where an enemy plane is, they will lose track of where it is going and vice versa. Trying harder to track the two variables will actually lead to more inaccuracy! Heisenberg’s Uncertainty Principle applies to myriad areas where excessive observation proves detrimental. Reality is imprecise.
​
Finally, Boyd made use of the Second Law of Thermodynamics. In a closed system, entropy always increases and everything moves towards chaos. Energy spreads out and becomes disorganized.

Although Boyd’s notes do not specify the exact applications, his inference appears to be that a fighter pilot must be an open system or they will fail. They must draw “energy” (information) from outside themselves or the situation will become chaotic. They should also aim to cut their opponent off, forcing them to become a closed system.
​

OK Go, "Upside Down and Inside Out"

OK Go, "Upside Down and Inside Out, How We Did It"