A History of Numbers

The first use of the concept of numbers in the historical record is their use in counting, or representing the count of, other physical objects or phenomena. In mathematical discussions, it is now customary to signal the use of the counting or natural numbers as a set represented by the letter N:

The Ishango bones are named after the place where they were found in the Democratic Republic of Congo (DRC) in 1960. The Belgian geologist Jean de Heinzelin de Braucourt uncovered the bones buried in layers of volcanic ashes on the shores of Lake Edward in the Ishango region, near the border with Uganda.  The Ishango bones are 10 to 14 cm long with several incisions on each of the faces.


The marks on the bones may be evidence of the earliest recorded mathematical activity of human beings. Dating as far back as 22,000 years ago, in the Upper Paleolitic era, the Ishango bones are the dark brown leg bones (fibula) of a baboon,  with a sharp piece of quartz affixed to one end for engraving.  It may be the oldest evidence of the practice of arithmetic in human history.

The first bone has been subject to a lot of interpretation. The second bone is broken, but has a similar pattern of notches, although it is difficult to draw conclusions because the piece is incomplete. The first bone is photographed in color above and rotated to show the sides.

No counting method seems quite as natural to us as that of holding up or turning in each finger, and since we have 10 fingers the decimal (base 10) system is the most common in human cultures.
The reason Maya numerals were vigesimal (20-base) is also anatomical. We have 10 fingers and 10 toes. Each limb (hand or foot) can count up to five and this is why many decimal or vigesimal systems include a quinary (base 5) subsystem. The figure below shows the sub-base of Maya’s vigesimal system is five, where one dot seems to represent one finger/toe and one horizon one limb. 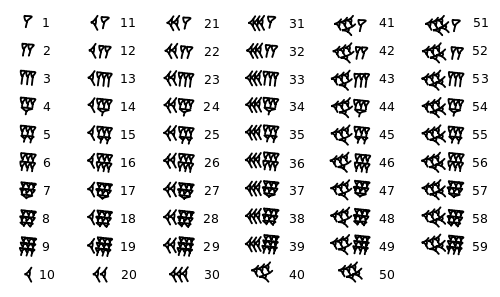 The Music of the Primes

Stacking Test for Primes: A Visual or Mental Manipulation

Ancient Egypt: Fractions and the Eye of Horus

Greece: Pythagoreans and the Square Root of 2