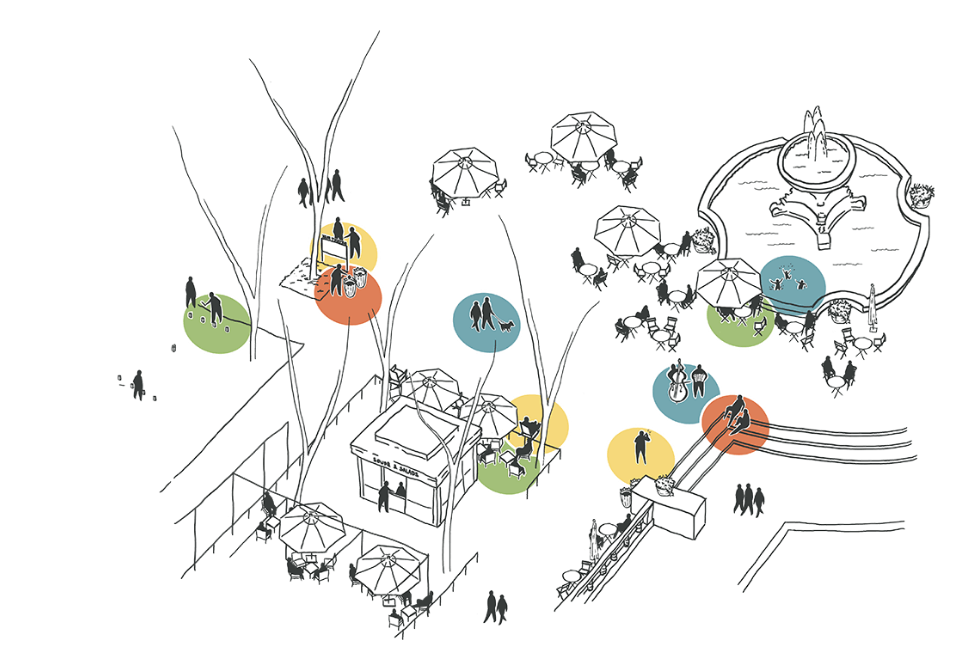 https://www.pps.org/article/grplacefeat
Placemaking is a multi-faceted approach to the planning, design and management of public spaces. Placemaking capitalizes on a local community's assets, inspiration, and potential, with the intention of creating public spaces that promote people's health, happiness, and well-being. It is political due to the nature of place identity. Placemaking is both a process and a philosophy that makes use of urban design principles. It can be either official and government led, or community driven grass roots tactical urbanism, such as extending sidewalks with chalk, paint, and planters, or open streets events such as Bogotá, Colombia's Ciclovía. Good placemaking makes use of underutilized space to enhance the urban experience at the pedestrian scale to build habits of locals.
​ 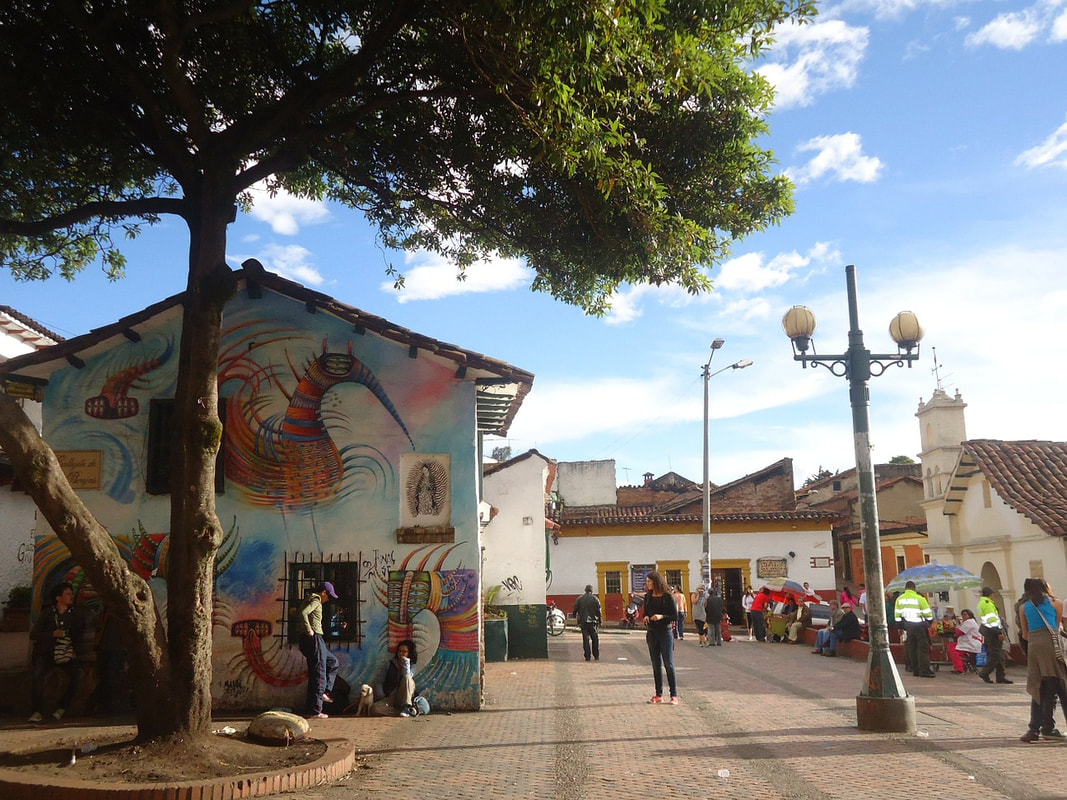 Triangulation is represented between a mural, cafe, and street vendor in Plazoleta del Chorro de Quevedo, located in La Candelaria, Bogotá, Colombia.
The concepts behind placemaking originated in the 1960s, when Jane Jacobs and William H. Whyte offered groundbreaking ideas about designing cities that catered to people, not just to cars and shopping centers. Their work focused on the importance of lively neighborhoods and inviting public spaces. Jacobs advocated citizen ownership of streets through the now-famous idea of "eyes on the street." Whyte emphasized essential elements for creating social life in public spaces.

The term came into use in the 1970s by landscape architects and urban planners to describe the process of creating squares, plazas, parks, streets and waterfronts that will attract people because they are pleasurable or interesting. Landscape often plays an important role in the design process. The term encourages disciplines involved in designing the built environment to work together in pursuit of qualities that they each alone are unable to achieve.

"We have theories, specialisms, regulations, exhortations, demonstration projects. We have planners. We have highway engineers. We have mixed use, mixed tenure, architecture, community architecture, urban design, neighbourhood strategy. But what seems to have happened is that we have simply lost the art of placemaking; or, put another way, we have lost the simple art of placemaking. We are good at putting up buildings but we are bad at making places."

"First life, then spaces, then buildings – the other way around never works. In a Society becoming steadily more privatized with private homes, cars, computers, offices and shopping centers, the public component of our lives is disappearing. It is more and more important to make the cities inviting, so we can meet our fellow citizens face to face and experience directly through our senses. Public life in good quality public spaces is an important part of a democratic life and a full life."
​
The writings of poet Wendell Berry have contributed to an imaginative grasp of place and placemaking, particularly with reference to local ecology and local economy.

"If what we see and experience, if our country, does not become real in imagination, then it never can become real to us, and we are forever divided from it . . . Imagination is a particularizing and a local force, native to the ground underfoot."
​

The Community is the Expert

The important starting point in developing a concept for any public space is to identify the talents and assets within the community. In any community there are people who can provide an historical perspective, valuable insights into how the area functions, and an understanding of the critical issues and what is meaningful to people. Tapping this information at the beginning of the process will help to create a sense of community ownership in the project that can be of great benefit to both the project sponsor and the community.

Create a Place, Not a Design

If your goal is to create a place (which we think it should be), a design will not be enough. To make an under-performing space into a vital "place," physical elements must be introduced that would make people welcome and comfortable, such as seating and new landscaping, and also through "management" changes in the pedestrian circulation pattern and by developing more effective relationships between the surrounding retail and the activities going on in the public spaces. The goal is to create a place that has both a strong sense of community and a comfortable image, as well as a setting and activities and uses that collectively add up to something more than the sum of its often simple parts. This is easy to say, but difficult to accomplish.

Partners are critical to the future success and image of a public space improvement project. Whether you want partners at the beginning to plan for the project or you want to brainstorm and develop scenarios with a dozen partners who might participate in the future, they are invaluable in providing support and getting a project off the ground. They can be local institutions, museums, schools and others.

You Can See a Lot Just By Observing

We can all learn a great deal from others' successes and failures. By looking at how people are using (or not using) public spaces and finding out what they like and don't like about them, it is possible to assess what makes them work or not work. Through these observations, it will be clear what kinds of activities are missing and what might be incorporated. And when the spaces are built, continuing to observe them will teach even more about how to evolve and manage them over time.

The vision needs to come out of each individual community. However, essential to a vision for any public space is an idea of what kinds of activities might be happening in the space, a view that the space should be comfortable and have a good image, and that it should be an important place where people want to be. It should instill a sense of pride in the people who live and work in the surrounding area.

The complexity of public spaces is such that you cannot expect to do everything right initially. The best spaces experiment with short term improvements that can be tested and refined over many years! Elements such as seating, outdoor cafes, public art, striping of crosswalks and pedestrian havens, community gardens and murals are examples of improvements that can be accomplished in a short time.

"Triangulation is the process by which some external stimulus provides a linkage between people and prompts strangers to talk to other strangers as if they knew each other" (Holly Whyte). In a public space, the choice and arrangement of different elements in relation to each other can put the triangulation process in motion (or not). For example, if a bench, a wastebasket and a telephone are placed with no connection to each other, each may receive a very limited use, but when they are arranged together along with other amenities such as a coffee cart, they will naturally bring people together (or triangulate!). On a broader level, if a children's reading room in a new library is located so that it is next to a children's playground in a park and a food kiosk is added, more activity will occur than if these facilities were located separately.

They Always Say, "It Can't Be Done"

One of Yogi Berra's great sayings is "If they say it can't be done, it doesn't always work out that way," and we have found it to be appropriate for our work as well. Creating good public spaces is inevitably about encountering obstacles, because no one in either the public or private sectors has the job or responsibility to "create places." For example, professionals such as traffic engineers, transit operators, urban planners and architects all have narrow definitions of their job - facilitating traffic or making trains run on time or creating long term schemes for building cities or designing buildings. Their job, evident in most cities, is not to create "places." Starting with small scale community-nurturing improvements can demonstrate the importance of "places" and help to overcome obstacles.

The input from the community and potential partners, the understanding of how other spaces function, the experimentation, and overcoming the obstacles and naysayers provides the concept for the space. Although design is important, these other elements tell you what "form" you need to accomplish the future vision for the space.

Money Is Not the Issue

This statement can apply in a number of ways. For example, once you've put in the basic infrastructure of the public spaces, the elements that are added that will make it work (e.g., vendors, cafes, flowers and seating) will not be expensive. In addition, if the community and other partners are involved in programming and other activities, this can also reduce costs. More important is that by following these steps, people will have so much enthusiasm for the project that the cost is viewed much more broadly and consequently as not significant when compared with the benefits.

You Are Never Finished

By nature good public spaces that respond to the needs, the opinions and the ongoing changes of the community require attention. Amenities wear out, needs change and other things happen in an urban environment. Being open to the need for change and having the management flexibility to enact that change is what builds great public spaces and great cities and towns. 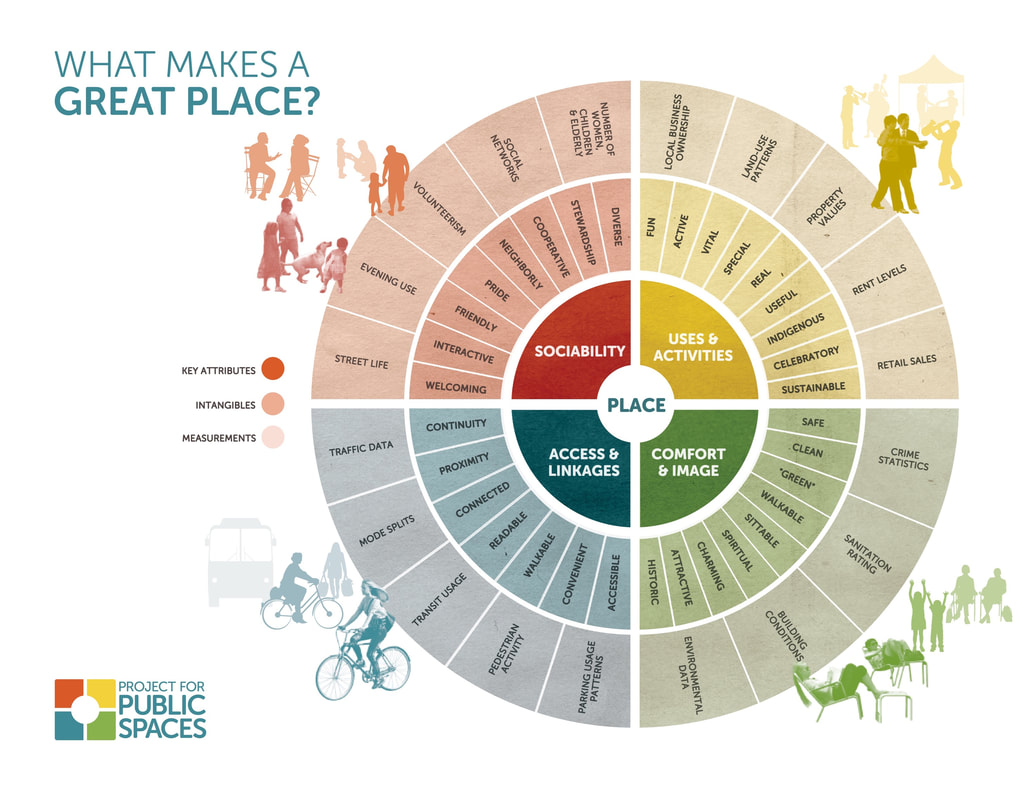