Be Confident for a Reason

When you rehearse, however, you should "train the way you're going to fight." Rehearse until you’re completely comfortable in front of other people, preferably in the same or similar space where you're going to deliver your presentation.

Listen to the feedback of people you trust. Keep rehearsing and making small changes and adjustments to your presentation, until you feel like you’re speaking to just one person in the audience, sharing enthusiastically in a conversation about a topic or issue you care deeply about.
​

Speaking in Front of Others: Being at the Center of Attention

The Science of Stage Fright
TED-Ed by  Mikael Cho
http://ed.ted.com/lessons/the-science-of-stage-fright-and-how-to-overcome-it-mikael-cho

Heart racing, palms sweating, labored breathing? No, you’re not having a heart attack – it’s stage fright! If speaking in public makes you feel like you’re fighting for your life, you’re not alone. But the better you understand your body’s reaction, the more likely you are to overcome it . . . read more
​

To start, understand what stage fright is. Humans, social animals that we are, are wired to worry about reputation. Public speaking can threaten it. Before a speech, you fret, “What if people think I’m awful and I’m an idiot?” That fear of being seen as an awful idiot is a threat reaction from a primitive part of your brain that’s very hard to control. It’s the fight or flight response, a self-protective process seen in a range of animals, most of which don’t give speeches.

But we have a wise partner in the study of freaking out. Charles Darwin tested fight or flight at the London Zoo snake exhibit. He wrote in his diary, “My will and reason were powerless against the imagination of a danger which had never been experienced.” He concluded that his response was an ancient reaction unaffected by the nuances of modern civilization. So, to your conscious modern mind, it’s a speech. To the rest of your brain, built up to code with the law of the jungle, when you perceive the possible consequences of blowing a speech, it’s time to run for your life or fight to the death.

Your hypothalamus, common to all vertebrates, triggers your pituitary gland to secrete the hormone ACTH, making your adrenal gland shoot adrenaline into your blood. Your neck and back tense up, you slouch. Your legs and hands shake as your muscles prepare for attack. You sweat. Your blood pressure jumps. Your digestion shuts down to maximize the delivery of nutrients and oxygen to muscles and vital organs, so you get dry mouth, and butterflies. Your pupils dilate, so it’s hard to read anything up close, like your notes, but long range is easy. That’s how stage fright works.

How do we fight it?

First, perspective. This isn’t all "in your head." It’s a natural, hormonal, full body reaction by an autonomic nervous system on autopilot. And genetics play a huge role in social anxiety. John Lennon played live thousands of times. Each time he vomited beforehand. Some people are just wired to feel more scared performing in public.

Since stage fright is natural and inevitable, focus on what you can control. Practice a lot, starting long before in an environment similar to the real performance. Practicing any task increases your familiarity and reduces anxiety, so when it’s time to speak in public, you’re confident in yourself and the task at hand. Steve Jobs rehearsed his epic speeches for hundreds of hours, starting weeks in advance. If you know what you’re saying, you’ll feed off the crowd’s energy instead of letting your hypothalamus convince your body it’s about to be lunch for a pack of predators.

But hey, the vertebrate hypothalamus has had millions of years more practice than you. Just before you go on stage, it’s time to fight dirty and trick your brain. Stretch your arms up and breath deeply. This makes your hypothalamus trigger a relaxation response. Stage fright usually hits hardest right before a presentation, so take that last minute to stretch and breathe. You approach the mic, voice clear, body relaxed. Your well-prepared speech convinces the wild crowd you’re a charismatic genius. How? You didn’t overcome stage fright, you adapted to it. And to the fact that no matter how civilized you may seem, in part of your brain, you’re still a wild animal . . . 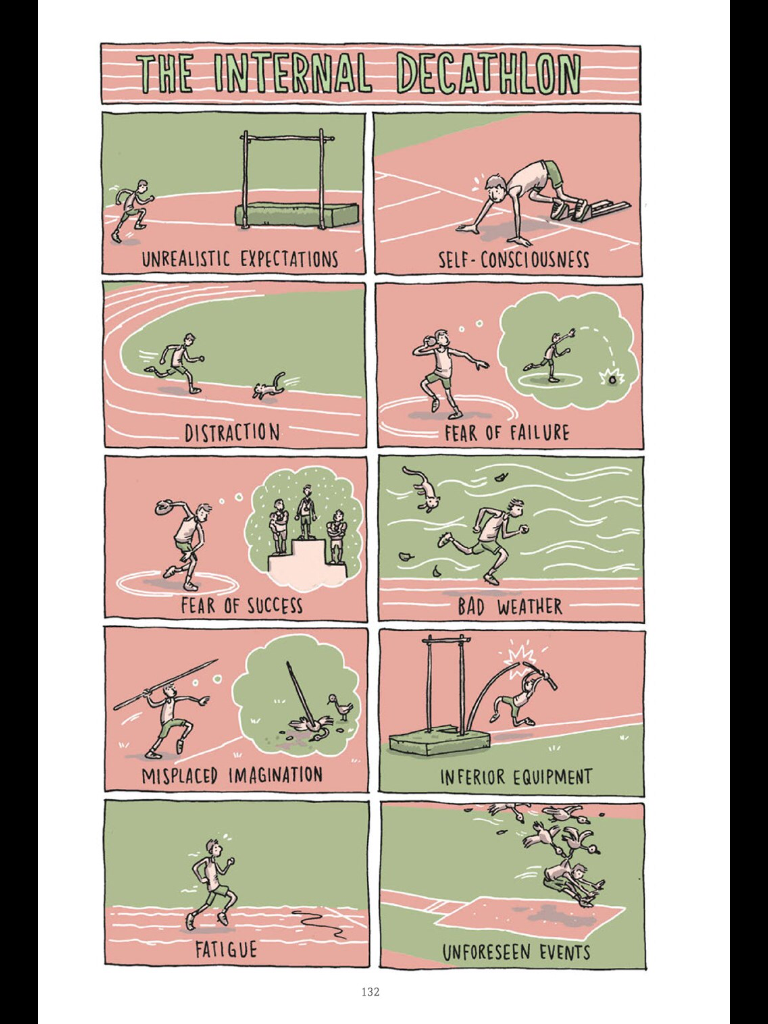