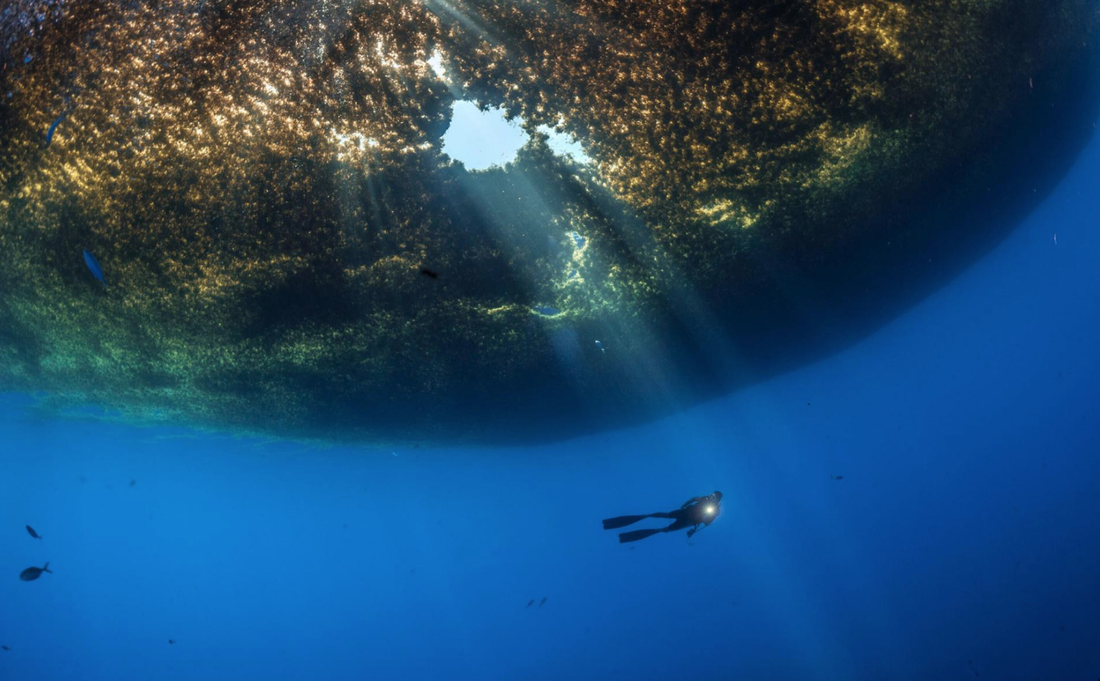 A diver floats beneath a mass of sargassum, pierced by shafts of sunlight, near Cozumel, Mexico.
Unusually large masses of sargassum have been washing ashore in the Gulf of Mexico, the Caribbean, and elsewhere, fouling beaches in tourist destinations.
​

Life in the North Atlantic depends on this floating seaweed

BY JAMES PROSEK
PHOTOGRAPHS BY DAVID DOUBILET AND DAVID LIITTSCHWAGER
NATIONAL GEOGRAPHIC, JUNE 2019
​‘THERE’S NOTHING LIKE it in any other ocean,’ says marine biologist Brian Lapointe. ‘There’s nowhere else on our blue planet that supports such diversity in the middle of the ocean—and it’s because of the weed.’


Lapointe is talking about a floating seaweed known as sargassum in a region of the Atlantic called the Sargasso Sea. The boundaries of this sea are vague, defined not by landmasses but by five major currents that swirl in a clockwise embrace around Bermuda. Far from any mainland, its waters are nutrient poor and therefore exceptionally clear and stunningly blue. 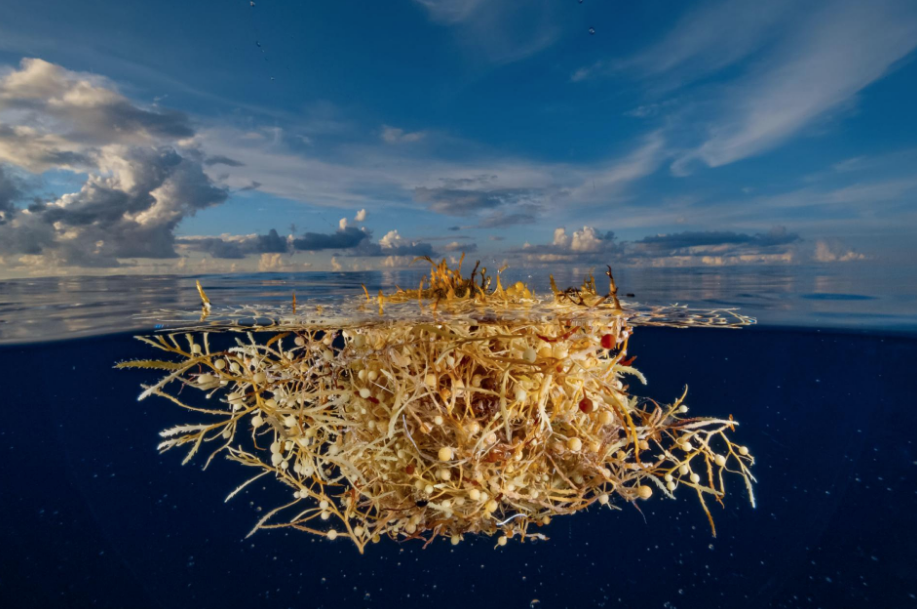 The Sargasso Sea, part of the vast whirlpool known as the North Atlantic gyre, often has been described as an oceanic desert—and it would appear to be, if it weren’t for the floating mats of sargassum.

The seaweed may seem unremarkable at first glance—just bunches of drifting plant matter—but as Lapointe has helped illuminate through his work, sargassum is the basis of a complex ecosystem that nurtures a stunning array of marine life. It serves as a mobile shelter and a movable feast.

For 36 years Lapointe, a biologist with Florida Atlantic University’s Harbor Branch Oceanographic Institute in Fort Pierce, has combed the Sargasso Sea, observing sargassum by satellite and experiencing it firsthand in scuba gear. He wanted to figure out where the weed comes from, how it moves, what it sustains, and what sustains it—and to unravel the complex relationship sargassum has with other forms of marine life, from seahorses to great white sharks. Only by learning about this vital resource, he says, can we protect it from potential threats, such as ocean acidification and pollution.
​

When it needs protecting, that is.

During the past few years, sargassum has been making the news not as life-giving manna but as a scourge, mounds of it fouling beaches in the Caribbean and Mexico. No one’s talking about protecting sargassum anymore, Lapointe says. “It’s more like, how do we get it to go away?”


The sailors aboard Christopher Columbus’s Santa María were of like mind. The weed in some places was “so thick that it actually held back the ships,” reads a September 20, 1492, entry in the ship’s log. Early explorers noted that the air bladders keeping the seaweed afloat reminded them of a grape they called sargazo.
​ 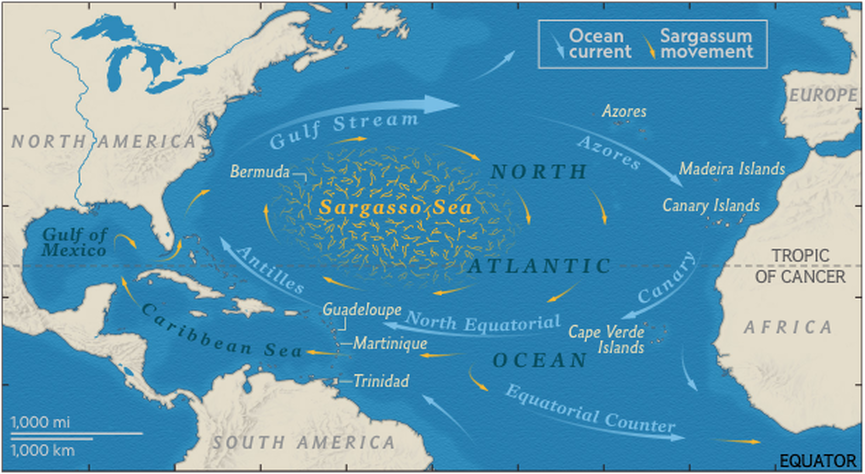 ​Sargassum originates in nutrient-rich zones close to the coast of the Americas, particularly in the Gulf of Mexico. Currents carry it around the Florida Peninsula, where it’s taken up by the northward-flowing Gulf Stream and eventually ends up in the Sargasso Sea.


Oceanographer Sylvia Earle, who helped initiate an effort to make the Sargasso Sea the first high seas marine protected area, likens sargassum to a golden rainforest. It’s an apt metaphor, because the weed forms a kind of canopy at the ocean surface. Sargassum brings to my mind a floating reef or even a marine grassland—a Serengeti of the sea.


Its tangled tresses support an astonishing diversity of organisms that hide in and feed off the weed—the larvae and juveniles, according to one study, of 122 different species of fish, as well as hatchling sea turtles, nudibranchs, seahorses, crabs, shrimps, and snails. The seaweed in turn is nourished by the excrement of these organisms.


Larger creatures such as fish and turtles find plenty to eat amid the sargassum, and they attract bigger predators—triggerfish, tripletails, filefish, mahi-mahis, and jacks, on up the chain of life to sharks, tuna, wahoos, and billfish. Tropic birds, shearwaters, petrels, terns, boobies, and other birds of the open ocean roost and forage on sargassum mats.
​ 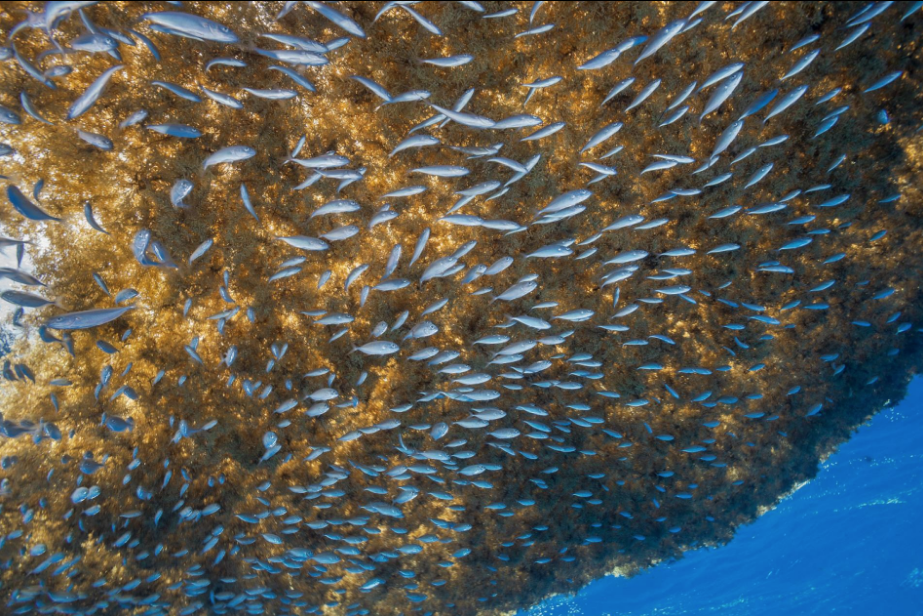 The two predominant species of sargassum in the Sargasso Sea are the only seaweeds in the world that don’t begin life attached to the seafloor. As a consequence of this life unmoored, the translucent gold- to amber-colored mats exist at the whim of the winds and currents, pulled apart in storms and reassembling in calmer seas, their edges locking together like Velcro. The weed masses vary in size from several miles long to pieces no bigger than your hand.
“Even those little clumps have organisms associated with them,” says Jim Franks, a senior research scientist and sargassum expert with the University of Southern Mississippi’s Gulf Coast Research Laboratory in Ocean Springs. The teeming life associated with sargassum must constantly adjust to the coming together and breaking apart of the nurturing islands. Sargassum, Franks says, “is one of the most dynamic marine habitats imaginable.”


The Sargasso Sea has long been associated with mystery. Eighteenth-century sailors referred to this part of the Atlantic as the horse latitudes because, the story goes, ships would get becalmed there and have to dump their horses overboard as freshwater supplies dwindled. And the Sargasso overlaps with the mythic region known as the Bermuda Triangle, where ships and planes are said to have disappeared without a trace. Whether or not you buy into the legends, when you’re out on the Sargasso Sea, you can’t help but be touched by moments of the sublime.
​ 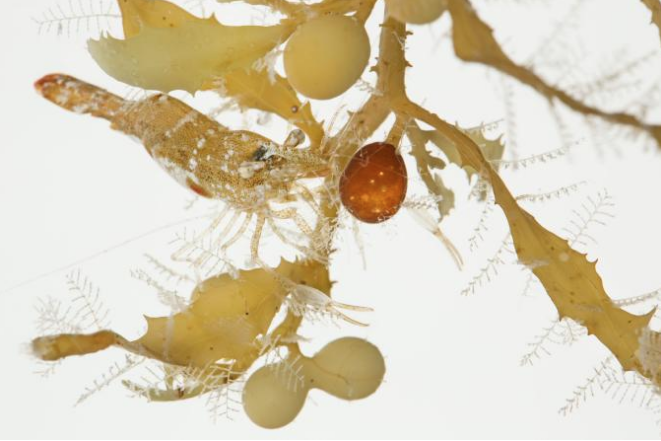 Small gas-filled bulbs called pneumatocysts keep sargassum buoyant and close to the surface,
providing a raft for this sargassum shrimp, whose color resembles the weed that hosts it.
​
One night underwater off Bermuda, photographer David Doubilet was taking pictures of fish attracted to a floodlight on our boat. He circled several flying fish when a large tiger shark was spotted at the periphery of the light. Doubilet was hauled out by his safety line in a hurry.


On repeated outings, we scouted for large mats of sargassum to explore. It was nowhere to be seen. “One day you won’t see any at all,” an old fisherman told us, “then you wake up the next morning, and the bays and harbors are choked with it.”


On other days we had better luck, netting clumps of sargassum and sorting through them in buckets, looking for marine life for photographer David Liittschwager to document. Turning one piece over, I spotted a froggy little creature with a big mouth and weedlike appendages: the sargassum fish, one of more than a dozen organisms that evolved to mimic the seaweed. Using its tiny pectoral fins to cling to the sargassum, it was all but invisible. Philippe Rouja, a Bermudian marine biologist who was helping us look for creatures living in the weed, dropped another little fish into the bucket. The sargassum fish immediately gulped it down in its large mouth.
​ 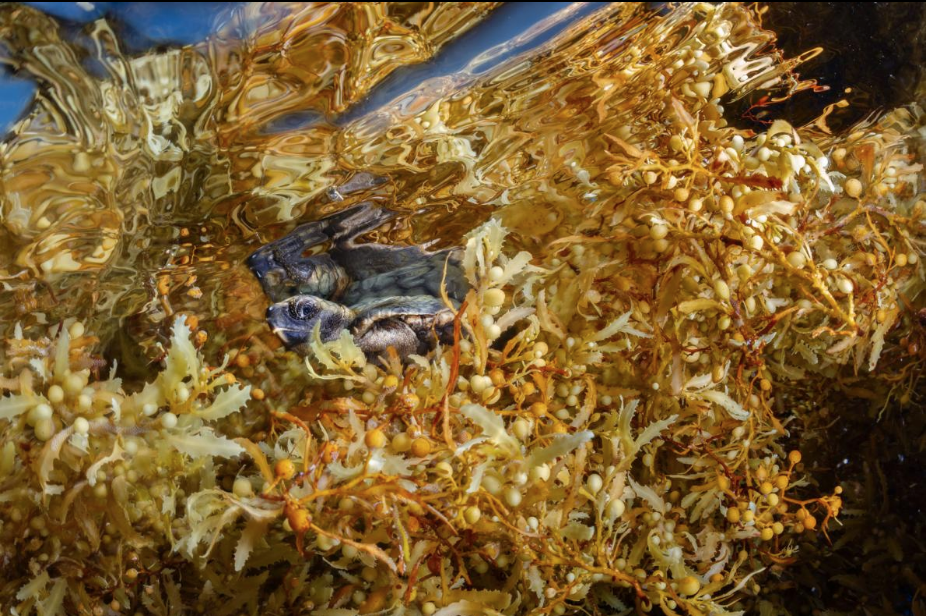 Hatchling sea turtles, like this juvenile loggerhead, make their way from the sandy beaches where they were born toward mats of sargassum weed,
​finding food and refuge from predators during their first years of life.
That night, I sat with Liittschwager as he photographed the day’s bounty. In one soccer-ball-size clump of sargassum, we counted 900 tiny fish larvae, 30 amphipods, 50 snails, four anemones, two flatworms, six crabs, 20 shrimps, seven nudibranchs, more than a thousand calcifying worms, and abundant bryozoans, diminutive copepods, and other planktonic animals almost too numerous to count.

“So,” an astonished Liittschwager said after we’d completed the inventory, “the conservative count is 3,000 creatures visible to the naked eye—well, with my reading glasses.”

Lapointe's efforts to promote sargassum’s virtues to a wider public have been derailed by the weed’s explosions in the Gulf, the Caribbean, Brazil, and even West Africa, smothering mangrove habitats, suffocating reefs, choking bays, burying beaches (the mats prevent hatchling turtles from making their way to the open sea), and hurting tourism.
“Too much of a good thing,” Lapointe says of the weed blooms—making the water “anoxic and putrid.”

During the past several years sargassum washed up on beaches on Martinique and Guadeloupe in piles more than 10 feet high. “I’ve got people telling me if this doesn’t stop, we’re going to have to shut down our resorts,” Lapointe says. People on Trinidad and other Caribbean islands have been forced to evacuate their homes because of the toxic hydrogen sulfide gas released by the rotting weed on beaches.
​ 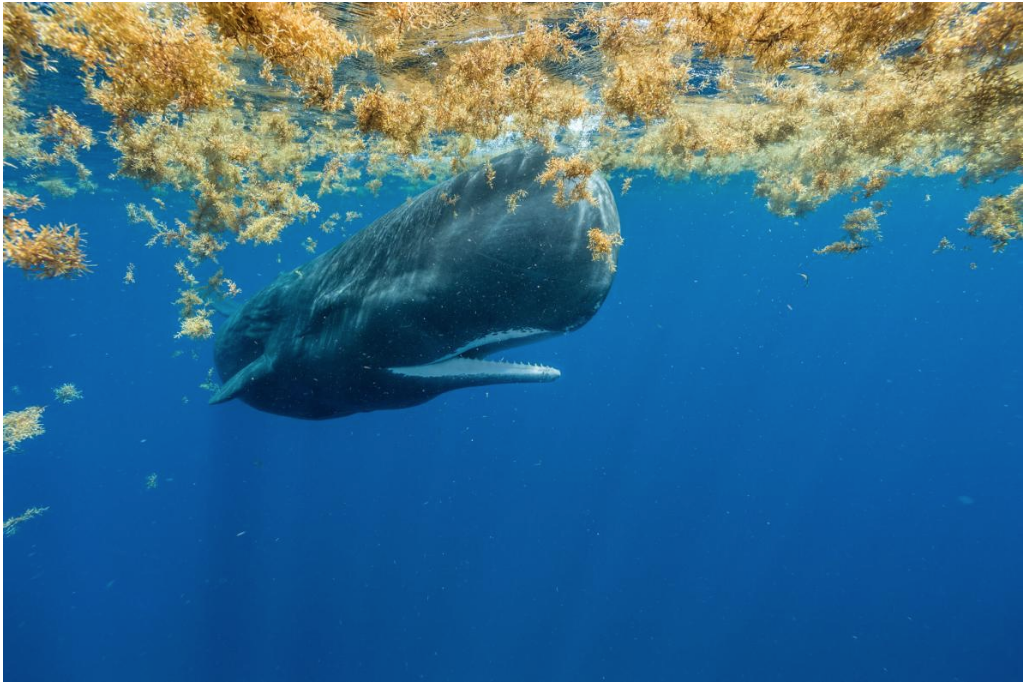 A sperm whale swims beneath golden sargassum. The weed nurtures countless life-forms, from single-celled organisms to the largest mammals.
​Excrement from these creatures helps extend the weed’s life.
​No one knows exactly why these blooms happen. Lapointe thinks climate change may be altering ocean currents, carrying sargassum to places it’s rarely been seen—from West Africa to the northern coast of Brazil. Another hypothesis is that phosphorus-rich, wind-borne dust from the Sahara that used to be blown across the Atlantic has been settling out at sea, triggering offshore blooms. But the main culprit is likely nitrogen enrichment from industrial farming in the U.S. interior—nutrients flowing from the Mississippi system into the Gulf, causing sargassum to grow rampantly.

“The system is too complex to fully understand,” Lapointe said, “but this is what seems to be happening. We’re tracking down the nitrogen trail, and it starts in the heartlands.”

I need look no farther than out my window in southern Connecticut to be reminded that interconnectedness in nature is not just a New Age platitude borrowed from Eastern philosophy. No creature better exemplifies the holism of nature than freshwater eels. They live in the pond across the street from my house, but guess where they—and every other American eel—were born? In a warm womb a few thousand miles away called the Sargasso Sea.