By Carla Wheeler
Green infrastructure tools are especially important for making land conversion and habitat loss real, both as past challenges and future threats. 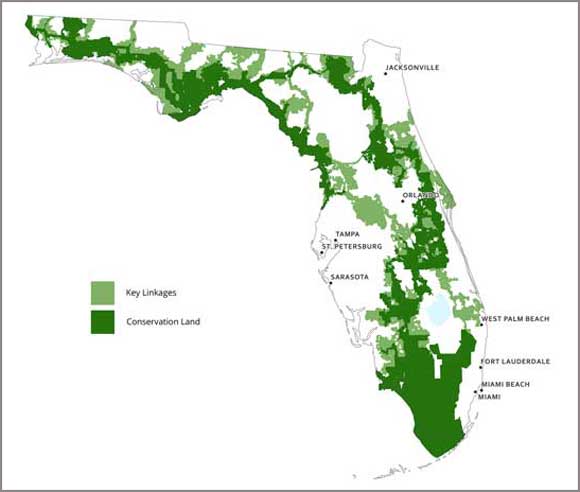 “Wild Florida is still there, but it’s hidden in plain sight, unseen, overlooked, or forgotten by most of Florida’s 21 million residents and 125 million annual visitors.” Carlton Ward Jr. is an eighth-generation Floridian and conservation photographer whose work has been published in magazines such as National Geographic, Smithsonian, and Audubon. Ward founded Florida Wildlife Corridor, an organization that aims to protect, connect, and restore land and waterways that have been identified as conservation priorities in a green infrastructure network throughout Florida. Ward talked about how he uses photographs, videos, and maps to tell stories about what he calls “wild Florida,” the ever-shrinking habitat for animals like the Florida panthers, black bears, bobcats, alligators, and birds such as cormorants. “This is my Florida,” he said as he showed photos of cowboys, oystermen, and Florida panthers.

Ward comes from a family of cattle ranchers and politicians. His great-grandfather, Doyle E. Carlton, was Florida’s twenty-fifth governor. And his family’s cattle ranch serves as a habitat for panthers and other wildlife. Rather than go into ranching or politics, Ward became a conservation photographer. He has traveled to Gabon in Africa to study biological diversity and photograph 400 different species of animals and plants. “Working in Gabon gave me an appreciation for intact wilderness,” he said.Eventually, however, wild Florida drew him home.

Ward, who has a master’s degree in ecology, has kayaked, hiked, and ridden horses during two 1,000-mile expeditions throughout the state, all the while photographing the wildlife that roam and the people who work the land he holds dear. Ward has captured spellbinding photographs of panthers and black bears as they travel through protected areas, cattle ranches, orange groves, or other undeveloped private and public lands. “I can help the panther take his own picture,” said Ward, who played a video of how he sets up the camera traps and then leaves his equipment behind in remote places.

During his presentation, Ward also displayed a map that traced the 500-mile journey of a bear named M34. The bear, fitted with a GPS tracking collar, traveled through south-central Florida over a two-month period. Although the animal was ultimately stopped and turned around by Interstate 4 and big housing developments nearby, Ward said the bear was able to travel that far thanks to a network of working farms and ranches that keep the public lands connected.
​
Ward says Florida’s population increases, in net, by about 1,000 people a day. Housing for these new arrivals often gobbles up land. Ward says his organization’s goal is to help grow his state’s wildlife corridors and keep these areas intact so wildlife can move about unhindered and unhurt. Endangered panthers have been struck and killed by vehicles. About 30 panthers were killed in 2018. 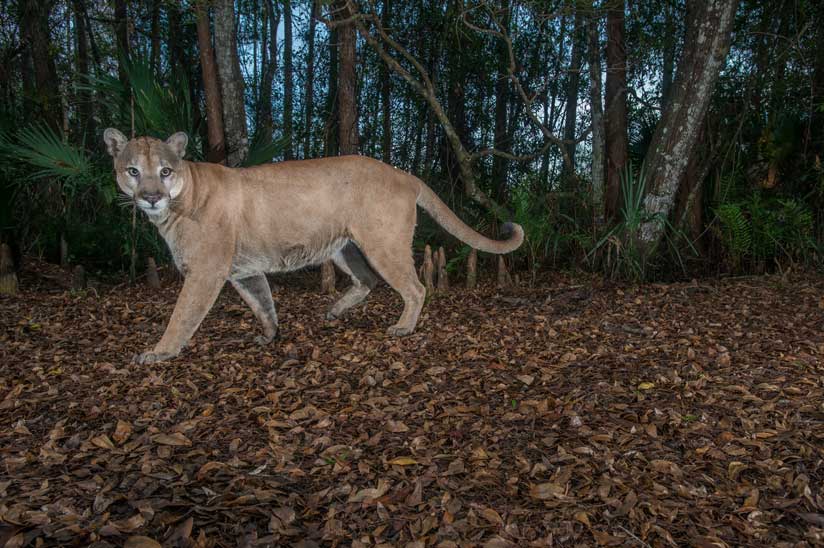 A male Florida panther travels through an oak hammock at the edge of a cypress strand at
​Babcock Ranch State Preserve near Ft. Myers. Photo courtesy of Carlton Ward Jr.
On the brighter side, wildlife crossings have been built under some highways, allowing animals like panthers and black bears to avoid the onslaught of cars and trucks. In November 2016, Ward said a female panther traveled to an area north of Caloosahatchee River—something that had not been documented since the early 1970s. This showed a northward expansion of the panther’s breeding habitat. Ward is currently working on a conservation photography project called Path of the Panther. The project collects donations to help elevate the story of the Florida panther and critical habitat needed to help save wild Florida.


In a panel discussion after his talk, Ward told members of the audience that geodesign can guide conservation stakeholders as they continue to expand the wildlife corridor. Geodesign combines the art of design, the science of geography, and input from stakeholders to find the most suitable, sustainable, and environmentally friendly options for using space. That may be space for wildlife conservation, agriculture, development, transportation, and marine protected areas—to name a few examples.


Time is short, said Ward. Currently about nine million acres of the Florida Wildlife Corridor are protected, and there’s an opportunity to conserve nearly seven million additional acres. “If we don’t take action in the next decade, we are going to have some irreversible [environmental] damage,” he said. “I am excited about the promise of geodesign to help create a universal framework and common language for land conservation and chart the course for protecting 30 percent of the planet by 2030 on the way to ultimately protecting half the planet.”