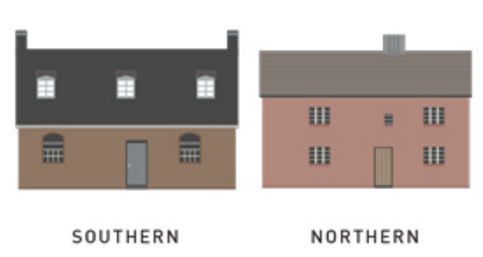 Music of the English Colonial Era
Built during the first generation of settlement by English colonists, the architecture labeled Colonial owes much of its appearance to building traditions from Europe. It could be argued that houses from this period are without style; they were not designed by architects. Several common elements mark these structures as early European settlers took advantage of materials at hand as well as architectural features remembered from their home country suited to their respective climates.
The first colonists in New England built primarily one room deep two story houses with a central chimney, although single story hall-parlor houses were built as well.  By the early 1700s, they began adding to the rear to give more interior space. The result was the one and a half room deep "saltbox."