Steel in History and Architecture 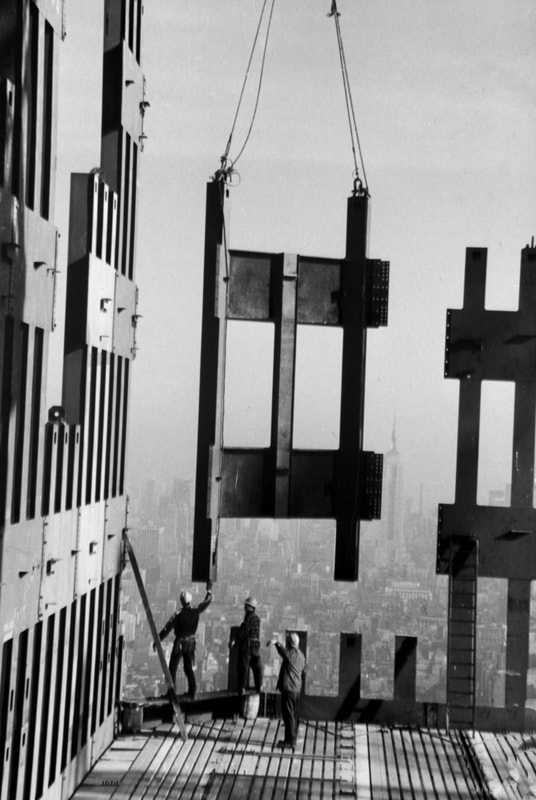 World Trade Center under construction, architecture by Minoru Yamasaki, 1968
Metal, for me, is the material of our time. It enables architecture to become sculpture.
--Frank Gehry, Canadian-born American architect
Steel was not understood by science until the 20th century. Before that, for about two thousand years, the making of steel was handed down through the generations as a secret craft, based on careful observation, intuitive guesswork, and chance. During the Stone Age, metal was extremely rare and highly prized. Copper and gold occurred naturally in the earth's crust, but most metals we take for granted today had to be extracted from ores. The small amount of iron early civilizations encountered, interestingly, fell from the sky in the form of meteorites, and the passage of the meteor through the earth's protective atmosphere provided the high temperature needed to extract the metal from the surrounding rock.
Early metalworking consisted of heating bits of iron or copper in a fire, causing it to soften, then hammering it into shape on a hard surface. This is due to the molecular properties of metals, which are usually arranged in the form of crystals. It may be odd to think that metals are made of crystals, because our typical image of a crystal is of a transparent and faceted gemstone.  Metal crystals are opaque, and microscopically small. Gaps or dislocations between the crystal molecules allow them to slide or change shape. This can be done using force, such as a hammer or the simple bending of a paper clip, or heating. The melting point of each type of metal is an indicator of how tightly the metal atoms are joined and resist dislocation. Lead has a low melting point; copper has a higher melting point.
Early metalsmiths worked with copper, beginning the Copper Age. As they learned through trial and error to combine metals through heating and hammering, they added tin to copper to create a stiffer metal, better for tools and weapons, beginning the Bronze Age. Long trade routes grew to link centers of civilization with areas where natural materials such as copper and tin were mined.
Steel, an alloy of iron and carbon, mystified metalworkers for thousands of years. Steel is stronger than bronze, and the materials easier to find, but for hundreds of years they did not realize that the iron was reacting with the charcoal in the fire. The right amount of carbon would make the iron stronger and also more flexible, but too little carbon made the cutting edge of tools and weapons dull quickly, while too much carbon would make the steel too stiff and brittle so it would snap under pressure. The making of steel was a long process of trial and error, with the variables of  the source of the iron, type of charcoal, temperature of the fire, and length of time in the furnace all contributing to success or failure. Skilled metalworkers made decisions based upon the color of the hot metal, the heat they felt on their skin, the sound of the fire, the sound of the ring or thud of the hammer striking the metal, and how the hammer recoiled or rebounded off the metal. Those that were successful handed down their knowledge and experience through apprenticeships and guarded their successes as trade secrets. Metalworker traditions in certain cultures became known as centers for trade. A source of iron could make a tribe rich; knowledge to forge steel from the iron would build an empire. The legend of King Arthur, the sword Excalibur, and armored knights in Britain, the samurai Shogunates of Japan, and the Roman legionaries are examples of steelmaking shaping cultures.
In the 1850s, English engineer Henry Bessemer patented a process of steelmaking using melted iron and controlling the amount of air flowing through the furnace to allow most of the carbon of the high-carbon coal used to escape as carbon dioxide. Melting the iron to liquid form and controlling the steel content through airflow allowed it to be poured into molds, allowing mass-production of steel parts that increased the pace of the Industrial Age. The internal structures of the tall buildings of cities and long spans of bridges were now easier to manufacture from steel.
In 1913, English engineer Harry Brearley added chromium to carbon and iron to produce stainless steel, a steel that resists the corrosion (iron-oxide, or rusting) of steel being exposed to air and water. Stainless steel, after a little more than 100 years, is still a highly visible element of architecture--clean-looking, shiny, and solid, it can be poured and molded into a variety of forms for artistic designs.
Mainly used in construction, the alloy has been used for almost every possible application: from office furniture to steel wool, from bulldozers to washing machines, and from wires to watches, the possibilities are pretty much endless. Steel is also one of the world’s most-recycled materials, able to be used more than once, with a recycling rate of over 60% globally.

The Kids Should See This: How Do They Recycle Steel? 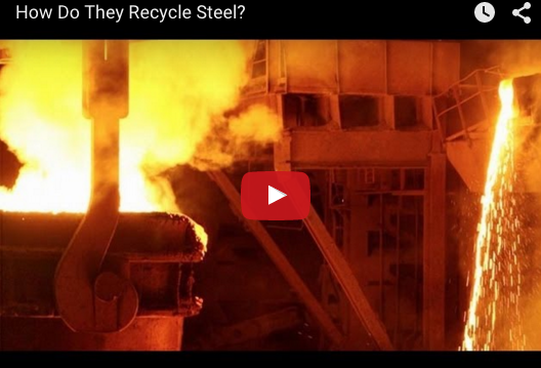