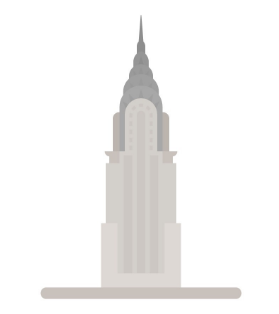 Art Deco and Early Skyscrapers Music
In contrast to architecture from previous eras, which made use of materials humans had mastered before the common era (leather, fabrics, wood, stone, and brick), the innovation of skyscrapers depended on the ability to produce high-quality steel and larger panes of glass. While earlier architects, even back into ancient times, had imagined towers, the structures they had been able to build were limited by the materials they had to use.
During the Industrial Age (which paralleled the Victorian Era in the 19th century and extended into the 20th century) the ability to produce large amounts of the same item of similar or identical quality enabled engineers and architects to predict how much weight steel columns and beams would support. Henry Bessemer of England experimented with a method of heating iron and carbon at precise temperatures with a controlled flow of oxygen to create high-quality Bessemer steel in the 1850s and 1860s. It was now possible to build up without the lower stories having to be thickened or pushes outward due to supporting the weight of the structure above.
The Chicago fire of 1871, which destroyed large areas of early 19th century construction, required city planners and architects to rebuild.  The increase in city populations after the American Civil War created a building boom where some architects and city planners envisioned building "up" (adding floors to city structures) instead of "out" (increasing the boundaries of the city).
Different sources offer slightly different interpretations (points of view) about which building began the modern skyscraper era and identify different places the word "skyscraper" was first used, but historians generally agree the United States in the 1880s produced the first buildings meeting the description (the Home Insurance Building in Chicago claims first place according to many sources in 1884) and the term "skyscraper" first appeared in US newspapers in 1888. While the first skyscrapers began at 10 stories, modern commentators will often use a lower limit of 50 to 60 floors to classify new structures as skyscrapers.

Even though the exterior facade or "curtain" wall is finished in blocks and bricks, the steel "cage" of horizontal and vertical steel beams, an innovation made popular by architect George Fuller in Chicago, can be seen in sketches from the time. Experience with early skyscraper construction also created very specialized roles for construction workers and others involved in the project: some companies came to focus of supplying materials, others on steel work, others on power, others on plumbing. With increasing complexity came increasing specialization. 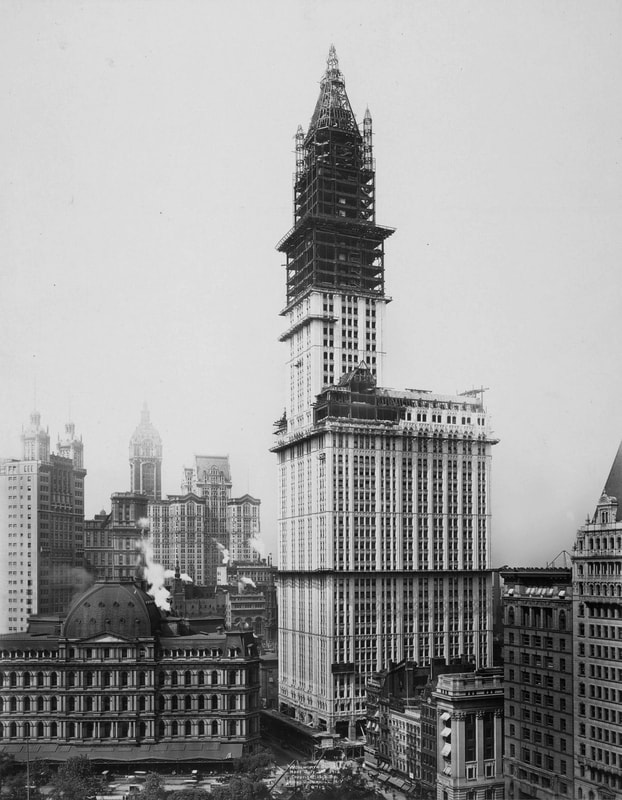 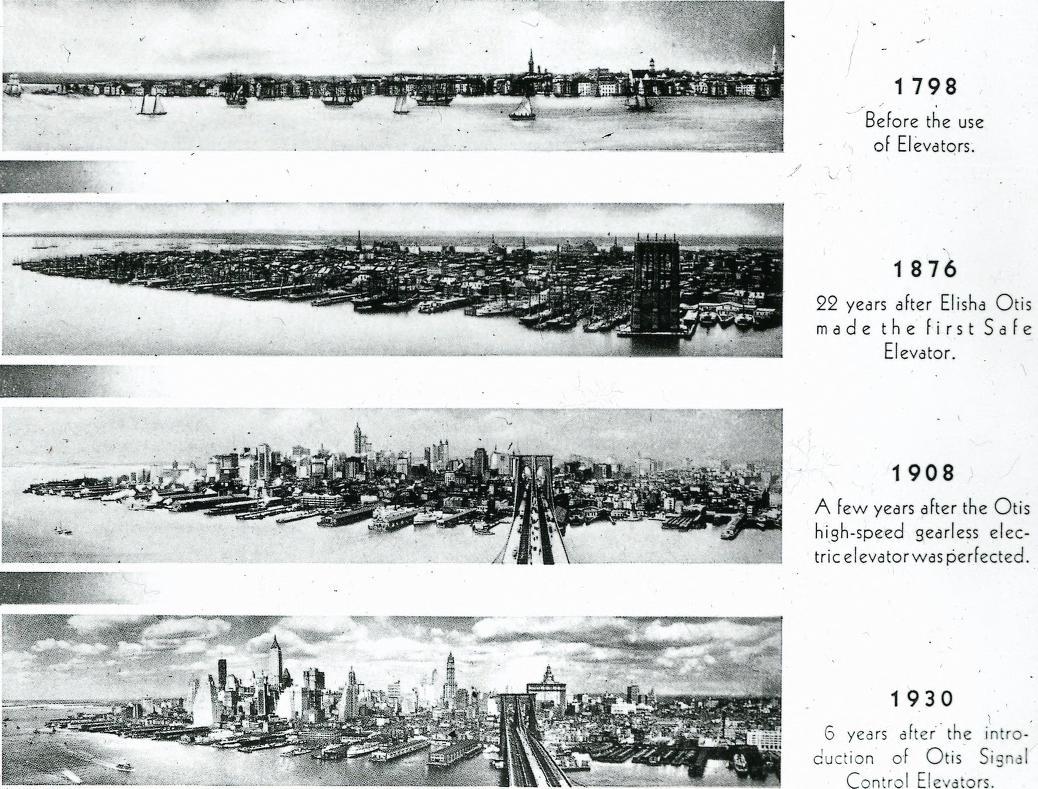 Another important innovation which made skyscrapers practical was the "elevating room," or elevator, with a safety brake to guard against cable failure, invented by Elisha Otis in 1853. Electrical power for the elevator and lighting, safer and easier to install than gaslight, had been introduced by Thomas Edison and Nikolai Tesla in the late 1870s.


The weight and height of new skyscrapers also presented new engineering challenges. Foundations had to be better prepared, extending the equivalent of several floors below street level, so the tallest buildings in the city often began with the excavation of deep pits to anchor the steel skeleton of the structure. As buildings grew taller, the force of the wind acting on the sides of the upper stories building made diagonal bracing of crucial importance.


As skyscraper construction developed in the 20th century, building owners and architects sought honors and recognition through a series of "firsts." In the 1931 New York City "Race to the Sky," a source of great excitement during the Great Depression, the 102-floor Empire State Building rose above the Chrysler Building and Bank of Manhattan Trust Building to become the city's, nation's, and world's tallest building until the World Trade Center surpassed it in 1973.

Worldwide, people dream of ever-taller structures and accept the challenges of new design, materials science, and construction methods. In 2014, developers announced construction would begin on the first building taller than a kilometer, the Kingdom Tower proposed for Jeddah, Saudi Arabia. From their beginnings 135 years ago to today, skyscrapers remain one of the ultimate expressions of human ambition, engineering, and wonder. 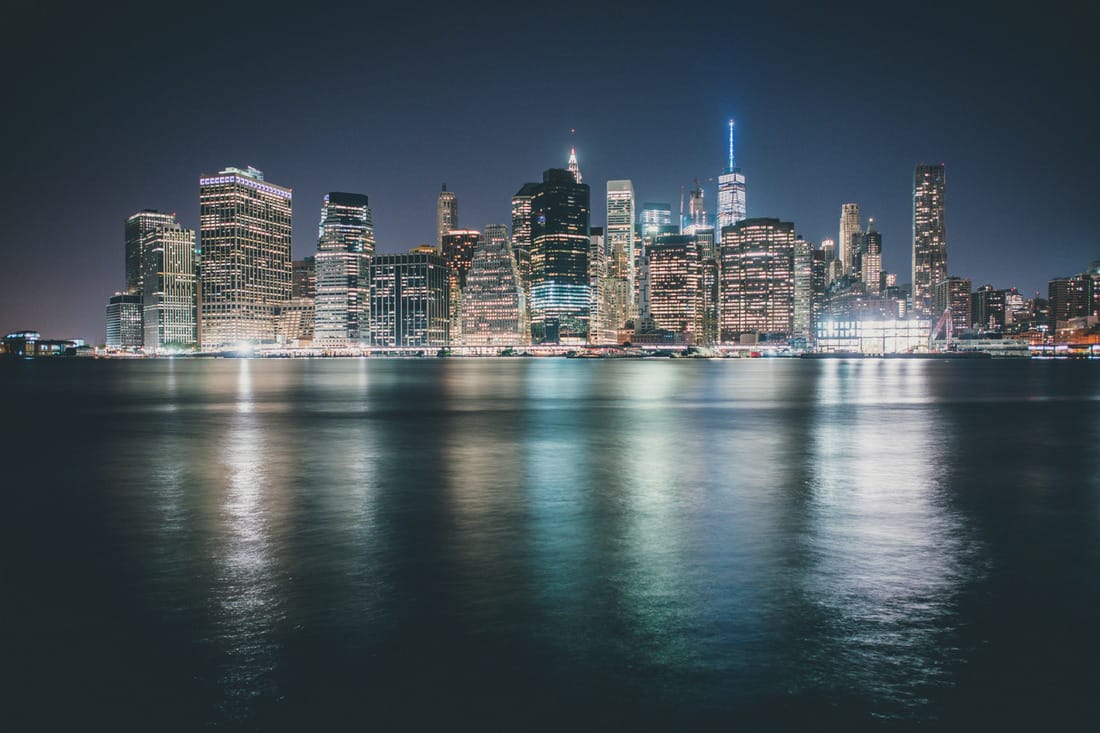