​Kublai Khan does not necessarily believe everything
Marco Polo says when he describes the cities visited on his expeditions, but
the emperor of the Tartars does continue listening to
the young Venetian with greater attention and curiosity than he shows any other messenger or explorer of his . . .
​ 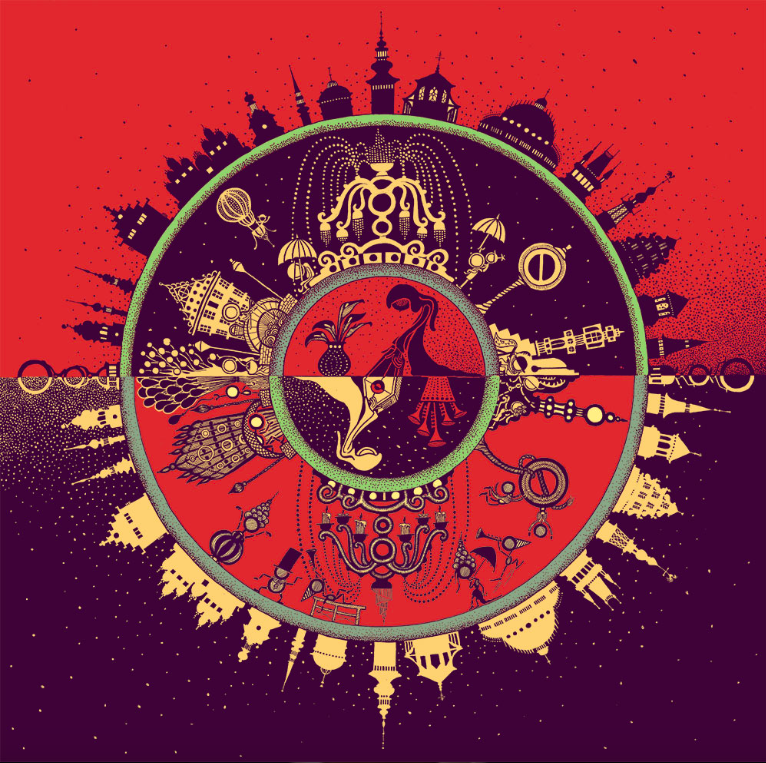 After a seven day’s march through woodland, the traveler directed toward Baucis cannot see the city and yet he has arrived. The slender stilts that rise from the ground at a great distance from one another and are lost above the clouds support the city. You climb them with ladders. On the ground the inhabitants rarely show themselves: having already everything they need up there, they prefer not to come down. Nothing of the city touches the earth except those long flamingo legs on which it rests and, when the days are sunny, a pierced, angular shadow that falls on the foliage.


There are three hypotheses about the inhabitants of Baucis: that they hate the earth; that they respect it so much they avoid all contact; that they love it as it was before they existed and with spyglasses and telescopes aimed downward they never tire of examining it, leaf by leaf, stone by stone, ant by ant, contemplating with fascination their own absence.
​ 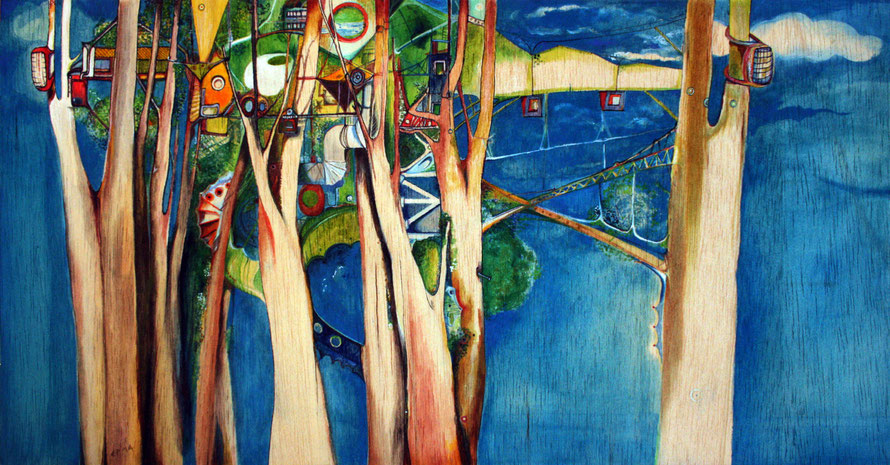 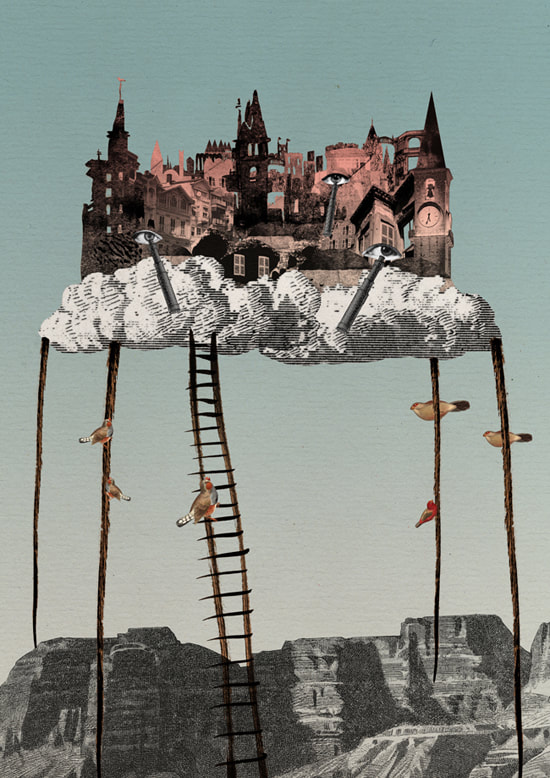 Despina can be reached in two ways: by ship or by camel. The city displays one face to the traveler arriving overland and a different one to him who arrives by sea.


When the camel driver sees, at the horizon of the tableland, the pinnacles of the skyscrapers come into view, the radar antennae, the white and red wind-socks flapping, the chimneys belching smoke, he thinks of a ship; he knows it is a city, but he thinks of it as a vessel that will take him away from the desert, a windjammer about to cast off, with the breeze already swelling the sails, not yet unfurled, or a steamboat with its boiler vibrating in the iron keel; and he thinks of all the ports, the foreign merchandise the cranes unload on the docks, the taverns where crews of different flags break bottles over one another’s heads, the lighted, ground-floor windows, each with a woman combing her hair.


In the coastline’s haze, the sailor discerns the form of a camel’s withers, an embroidered saddle with glittering fringe between two spotted humps, advancing and swaying; he knows it is a city, but he thinks of it as a camel from whose pack hang wine-skins and bags of candied fruit, date wine, tobacco leaves, and already he sees himself at the head of a long caravan taking him away from the desert of the sea, toward oases of fresh water in the palm trees’ jagged shade, toward palaces of thick, whitewashed walls, tiled courts where girls are dancing barefoot, moving their arms, half-hidden by their veils, and half-revealed.


Each city receives its form from the desert it opposes; and so the camel driver and the sailor see Despina, a border city between two deserts.
​ 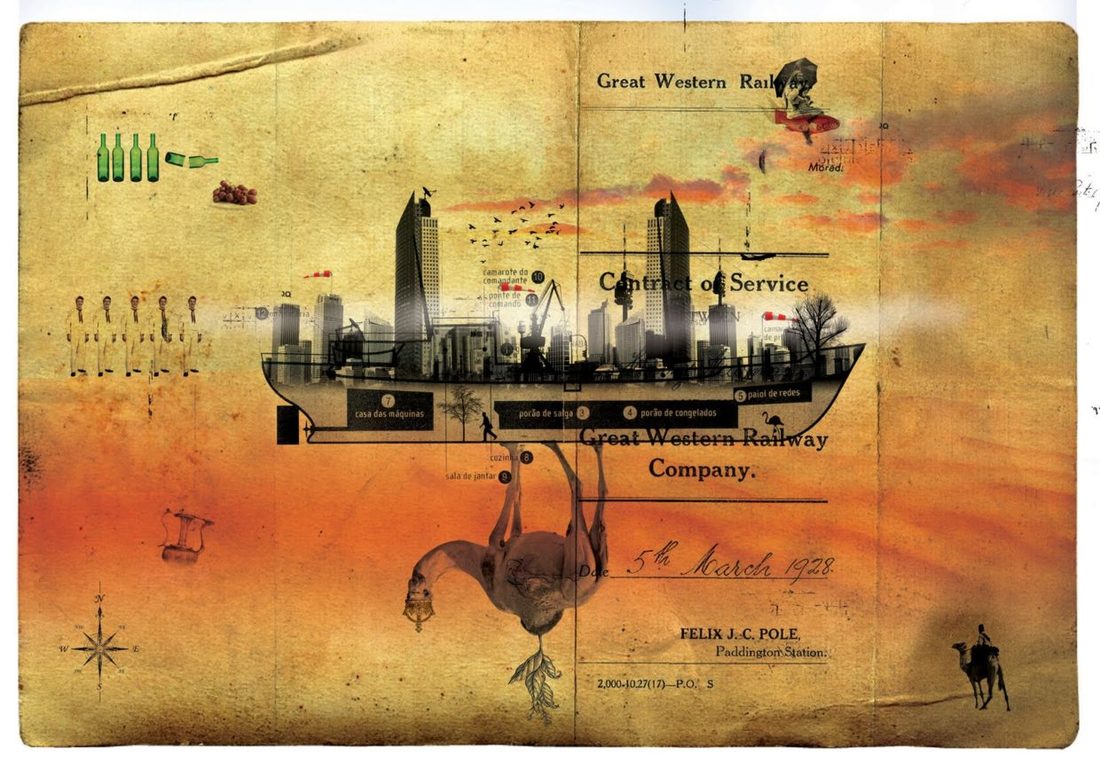 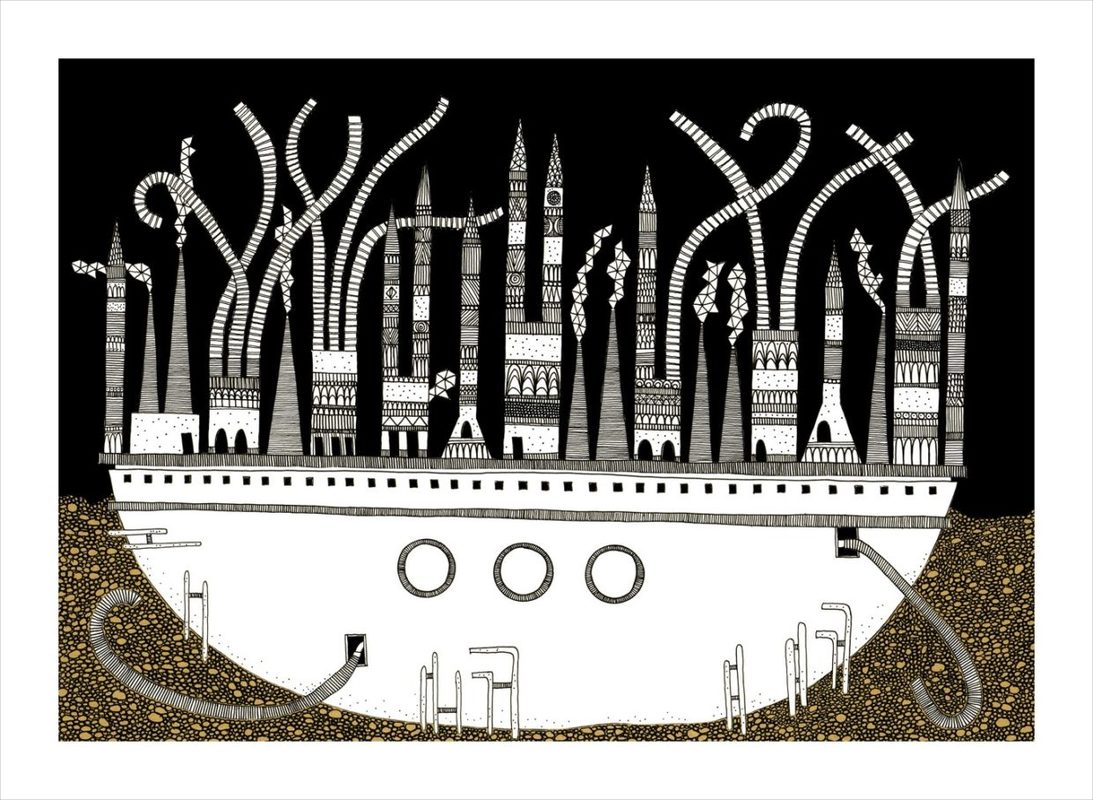 Leaving there and proceeding for three days toward the east, you reach Diomira, a city with sixty silver domes, bronze statues of all the gods, streets paved with lead, a golden cock that crows each morning on a tower. All these beauties will already be familiar to a visitor, who has seen them also in other cities. But the special quality of this city for the man who arrives there on a September evening, when days are growing shorter and the multicolored lamps are lighted all at once at the doors of the food stalls and from a terrace a woman’s voice cries ooh!, is that he feels envy toward those who now believe they have once before lived an evening identical to this and who think they were happy, that time.
​ 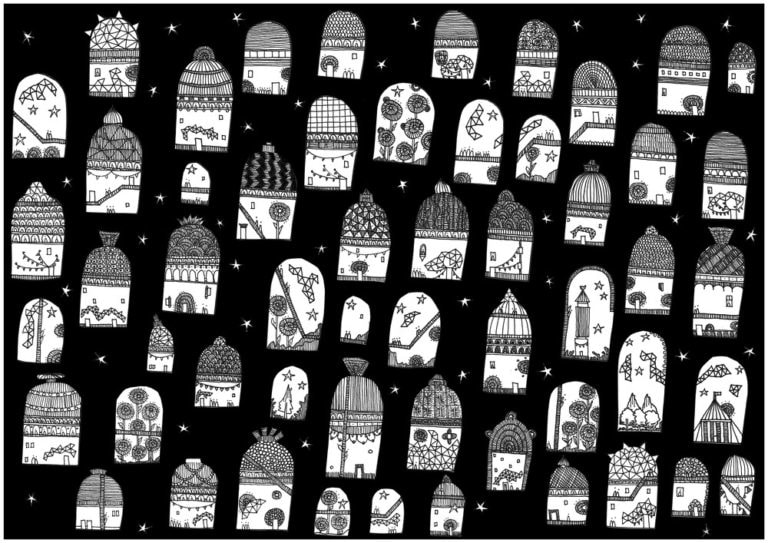 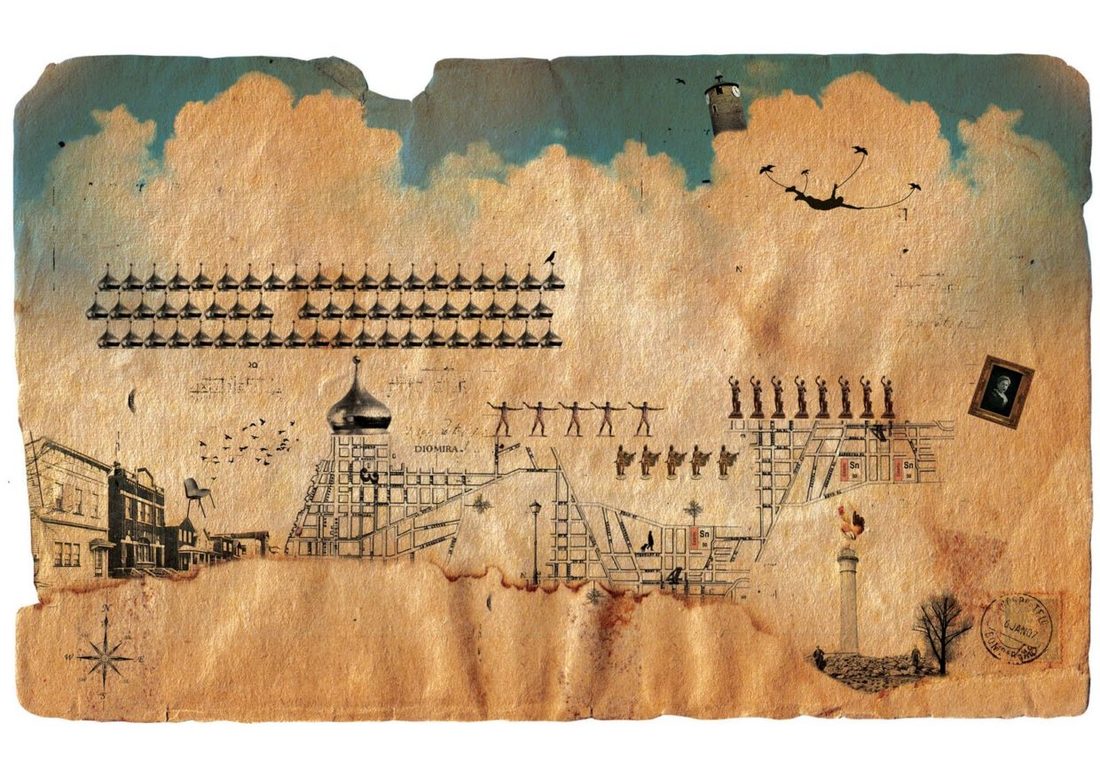 In Ersilia, to establish the relationships that sustain the city’s life, the inhabitants stretch strings from the corners of the houses, white or black or gray or black-and-white according to whether they mark a relationship of blood, of trade, authority, agency. When the strings become so numerous that you can no longer pass among them, the inhabitants leave: the houses are dismantled; only the strings and their supports remain.


From a mountainside, camping with their household goods, Ersilia’s refugees look at the labyrinth of taut strings and poles that rise in the plain. That is the city of Ersilia still, and they are nothing.


They rebuild Ersilia elsewhere. They weave a similar pattern of strings which they would like to be more complex and at the same time more regular than the other. Then they abandon it and take themselves and their houses still farther away.


Thus, when traveling in the territory of Ersilia, you come upon the ruins of the abandoned cities, without the walls which do not last, without the bones of the dead which the wind rolls away: spiderwebs of intricate relationships seeking a form. 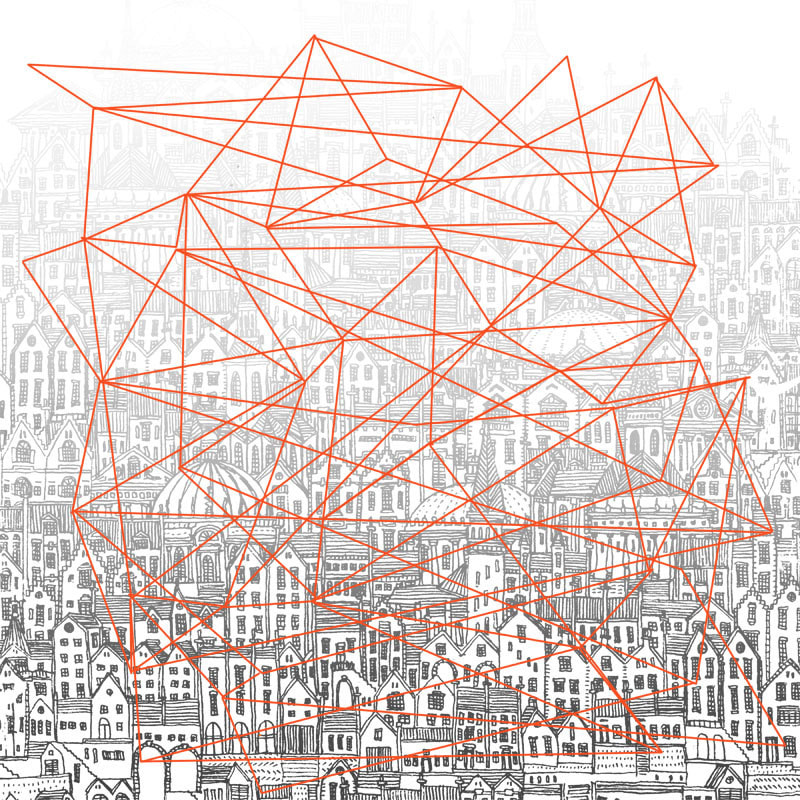 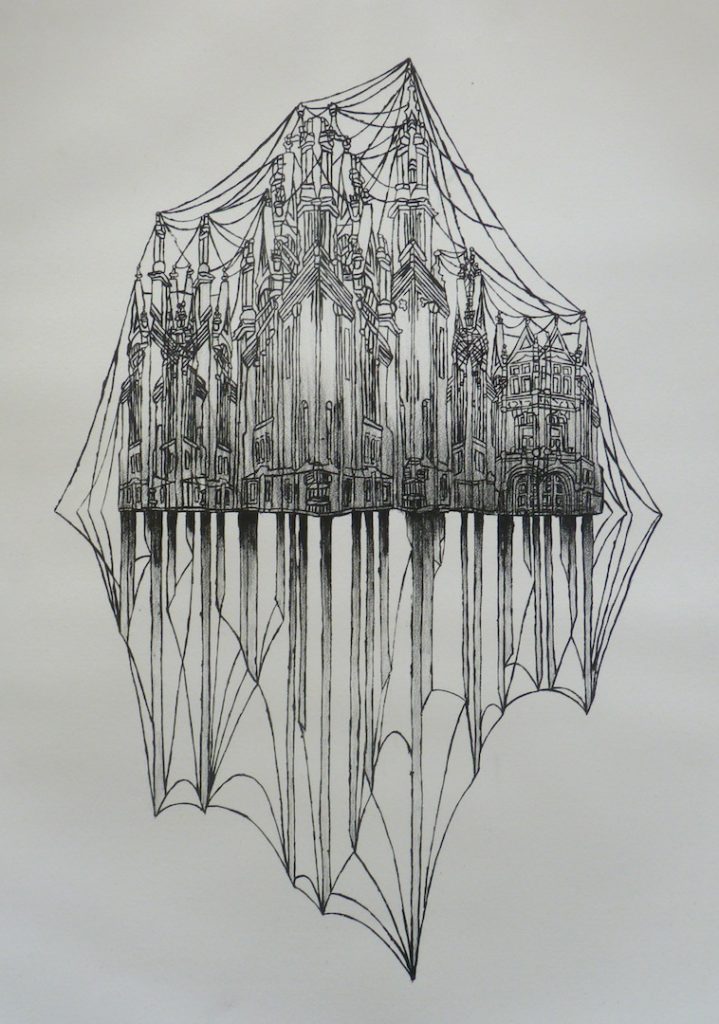 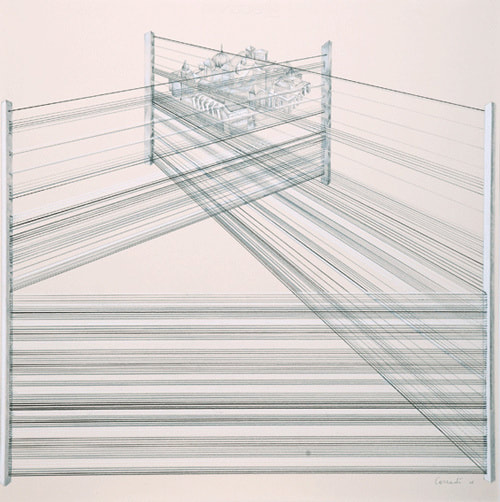 Now I will tell how Octavia, the spider-web city, is made. There is a precipice between two steep mountains: the city is over the void, bound to the two crests with ropes and chains and catwalks. You walk on the little wooden ties, careful not to set your foot in the open spaces, or you cling to the hempen strands. Below there is nothing for hundreds and hundreds of feet: a few clouds glide past; farther down you can glimpse the chasm’s bed.


This is the foundation of the city: a net which serves as passage and as support. All the rest, instead of rising up, is hung below: rope ladders, hammocks, houses made like sacks, clothes hangers, terraces like gondolas, skins of water, gas jets, spits, baskets on strings, dumb-waiters, showers, trapezes and rings for children’s games, cable cars, chandeliers, pots with trailing plants.


Suspended over the abyss, the life of Octavia’s inhabitants is less uncertain than in other cities. They know the net will last only so long.
​ 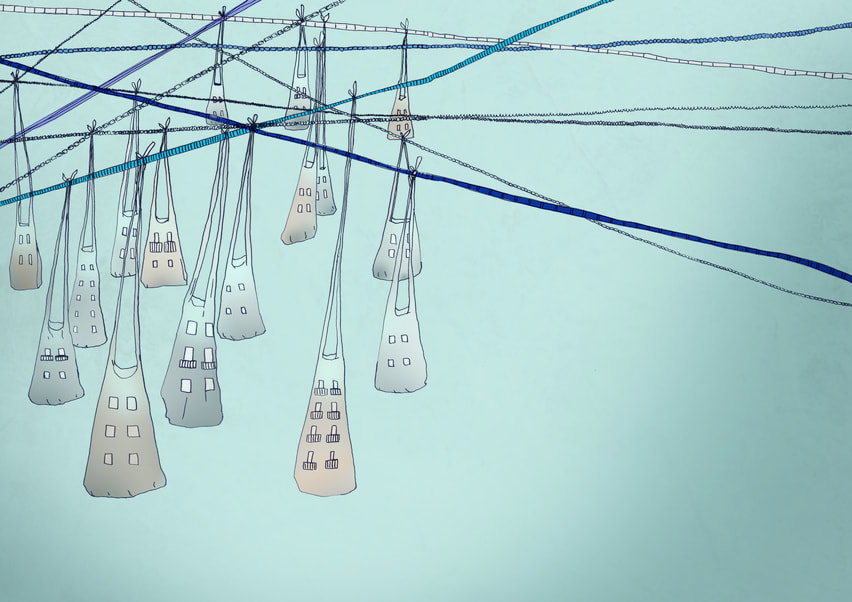 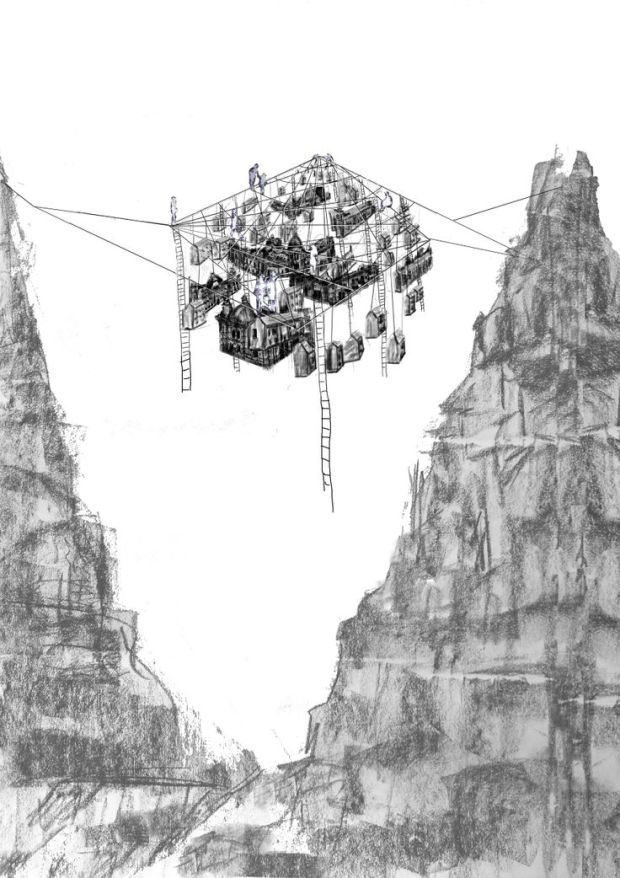 The city of Sophronia is made up of two half-cities. In one there is the great roller coaster with its steep humps, the carousel with its chain spokes, the Ferris wheel of spinning cages, the death-ride with crouching motorcyclists, the big top with the clump of trapezes hanging in the middle.The other half-city is of stone and marble and cement, with the bank, the factories, the palaces, the slaughterhouse, the school, and all the rest. One of the half-cities is permanent, the other is temporary, and when the period of its sojourn is over, they uproot it, dismantle it, and take it off, transplanting it to the vacant lots of another half-city.


And so every year the day comes when the workmen remove the marble pediments, lower the stone walls, the cement pylons, take down the Ministry, the monument, the docks, the petroleum refinery, the hospital, load them on trailers, to follow from stand to stand their annual itinerary. Here remains the half-Sophronia of the shooting-galleries and the carousels, the shout suspended from the cart of the headlong roller coaster, and it begins to count the months, the days it must wait before the caravan returns and a complete life can begin again.
​ 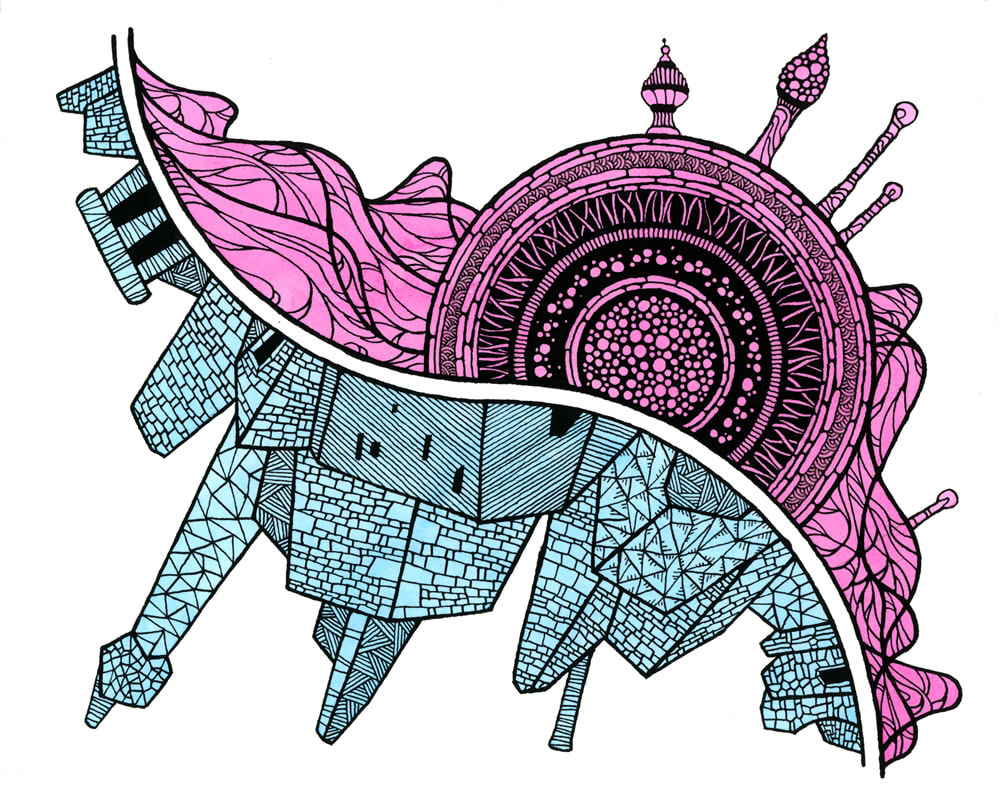 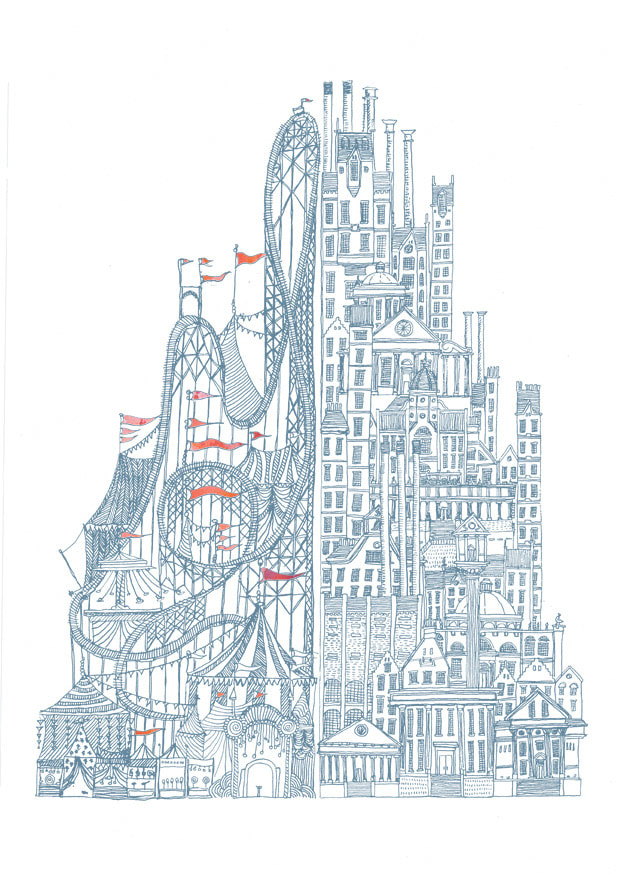 Those who arrive at Thekla can see little of the city, beyond the plank fences, the sackcloth screens, the scaffoldings, the metal armatures, the wooden catwalks hanging from ropes or supported by sawhorses, the ladders, the trestles. If you ask “Why is Thekla’s construction taking such a long time?” the inhabitants continue hoisting sacks, lowering leaded strings, moving long brushes up and down, as they answer “So that it’s destruction cannot begin.” And if asked whether they fear that, once the scaffoldings are removed, the city may begin to crumble and fall to pieces, they add hastily, in a whisper, “Not only the city.”


If, dissatisfied with the answers, someone puts his eye to a crack in a fence, he sees cranes pulling up other cranes, scaffoldings that embrace other scaffoldings, beams that prop up other beams. “What meaning does your construction have?” he asks. “What is the aim of a city under construction unless it is a city? Where is the plan you are following, the blueprint?”


“We will show it to you as soon as the working day is over; we cannot interrupt our work now,” they answer.


Work stops at sunset. Darkness falls over the building site. The sky is filled with stars. “There is the blueprint,” they say.
​ 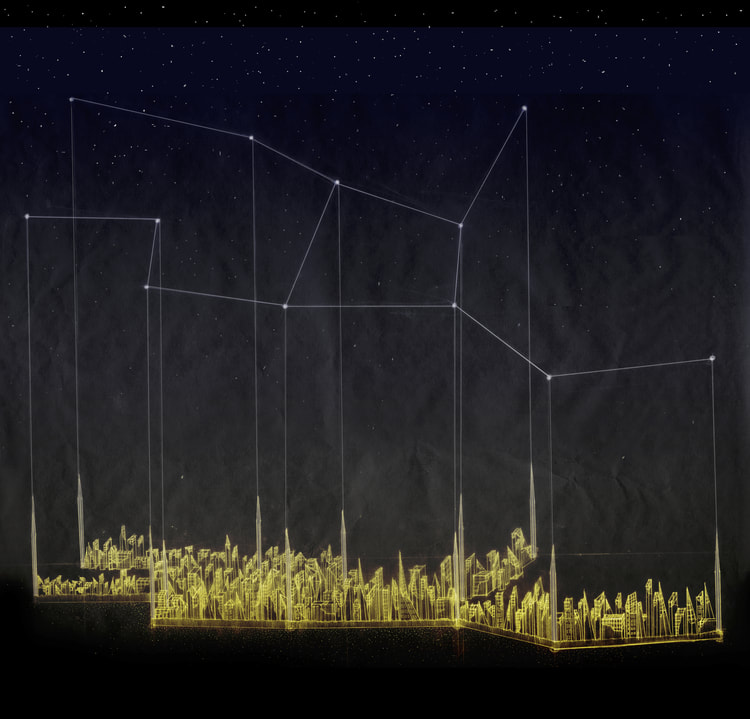 Now I shall tell of the city of Zenobia, which is wonderful in this fashion: although set on dry terrain it stands on high pilings, and the houses are of bamboo and zinc, with many platforms and balconies placed on stilts at various heights, crossing one another, linked by ladders and hanging side-walks surmounted by cone-roofed belvederes, barrels storing water, weather vanes, jutting pulleys, and fish poles, and cranes.


No one remembers what need or command or desire drove Zenobia’s founders to give their city this form, and so there is no telling whether it was satisfied by the city as we see it today, which has perhaps grown through successive superimpositions from the first, now undecipherable plan. But what is certain is that if you ask an inhabitant of Zenobia to describe his vision of a happy life, it is always a city like Zenobia that he imagines, with its pilings and its suspended stairways, a Zenobia perhaps quite different, a-flutter with banners and ribbons, but always derived by combining elements of that first model.
​

This said, it is pointless trying to decide whether Zenobia is to be classified among happy cities or among the unhappy. It makes no sense to divide cities into these two species, but rather into another two: those that through the years and the changes continue to give their form to desires, and those in which desires either erase the city or are erased by it. 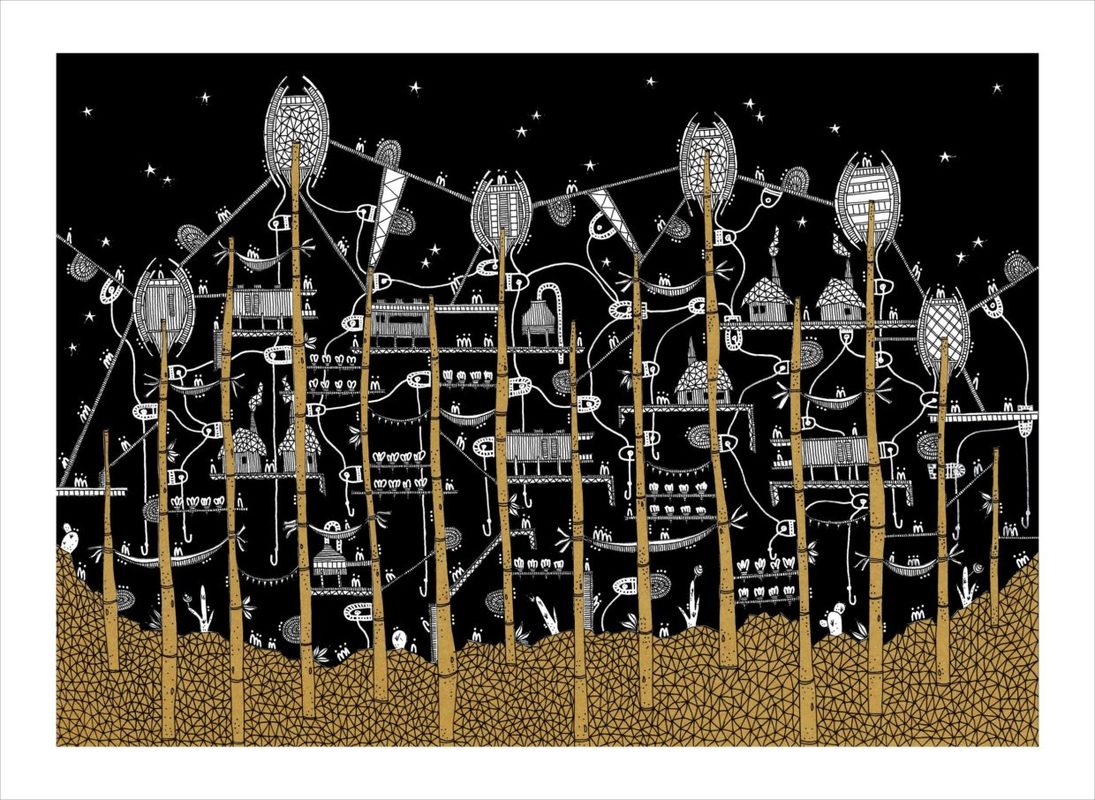 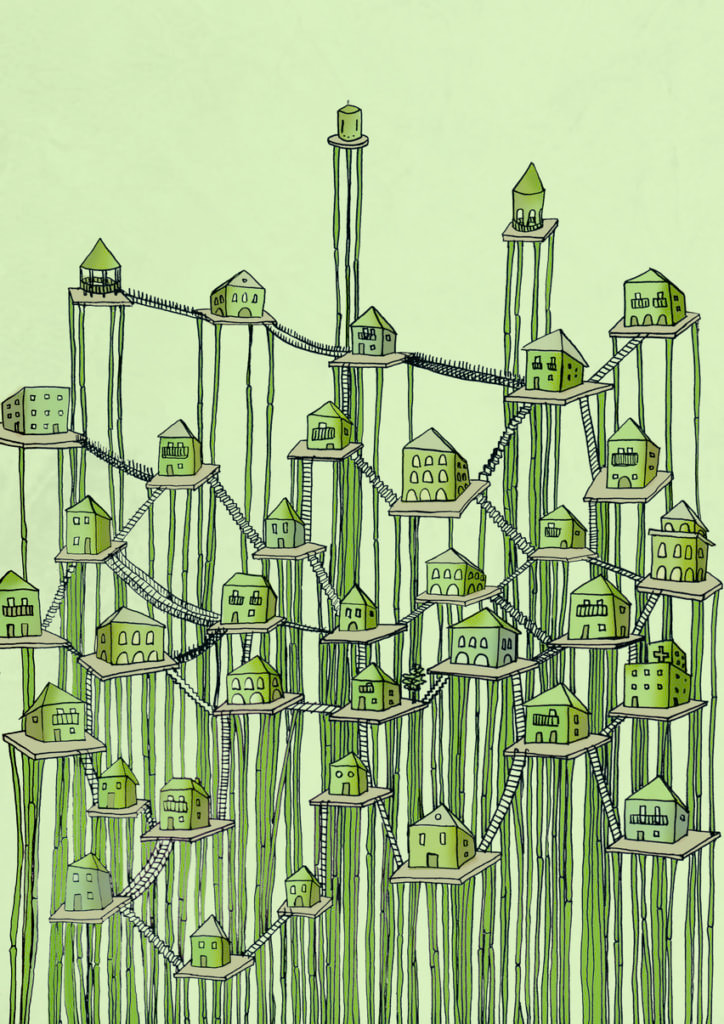 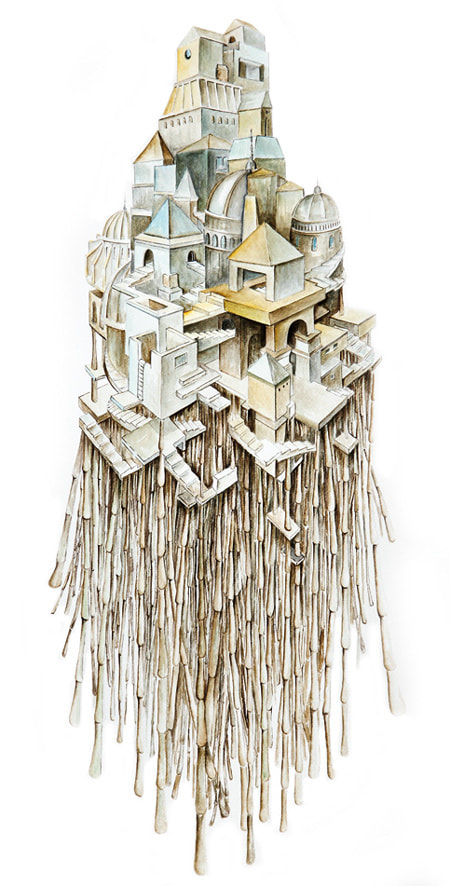 Beyond six rivers and three mountain ranges rises Zora, a city that no one, having seen it, can forget. But not because, like other memorable cities, it leaves an unusual image in your recollections. Zora has the quality of remaining in your memory point by point, in its succession of streets, of houses along the streets, and of doors and windows in the houses, though nothing in them possesses a special beauty or rarity. Zora’s secret lies in the way your gaze runs over patterns following one another as in a musical score where not a note can be altered or displaced. The man who knows by heart how Zora is made, if he is unable to sleep at night, can imagine he is walking along the streets and he remembers the order by which the copper clock follows the barber’s striped awning, then the fountain with nine jets, the astronomer’s glass tower, the melon vendor’s kiosk, the statue of the hermit and the lion, the Turkish bath, the café at the corner, the alley that leads to the harbor. This city which cannot be expunged from the mind is like an armature, a honeycomb in whose cells each of us can place the things he wants to remember: names of famous men, virtues, numbers, vegetable and mineral classifications, dates of battles, constellations, parts of speech. Between each idea and each point of the itinerary an affinity or a contrast can be established, serving as an immediate aid to memory. So the world’s learned men are those who have memorized Zora.


But in vain I set out to visit the city: forced to remain motionless and always the same, in order to be more easily remembered, Zora has languished, disintegrated, disappeared. The earth has forgotten her.
​ 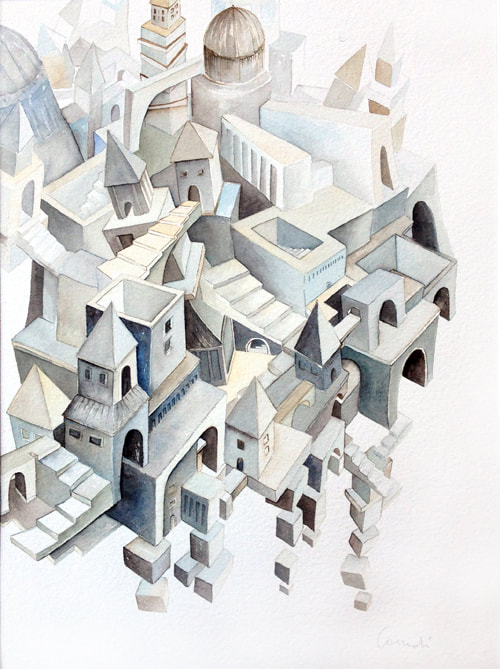 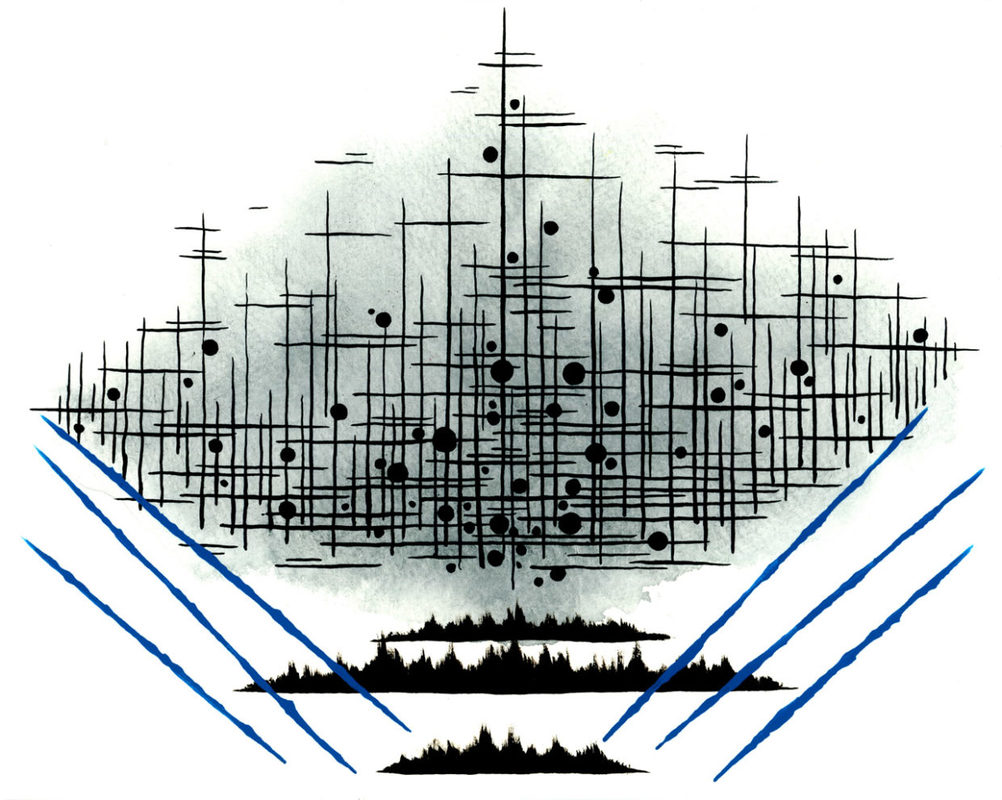 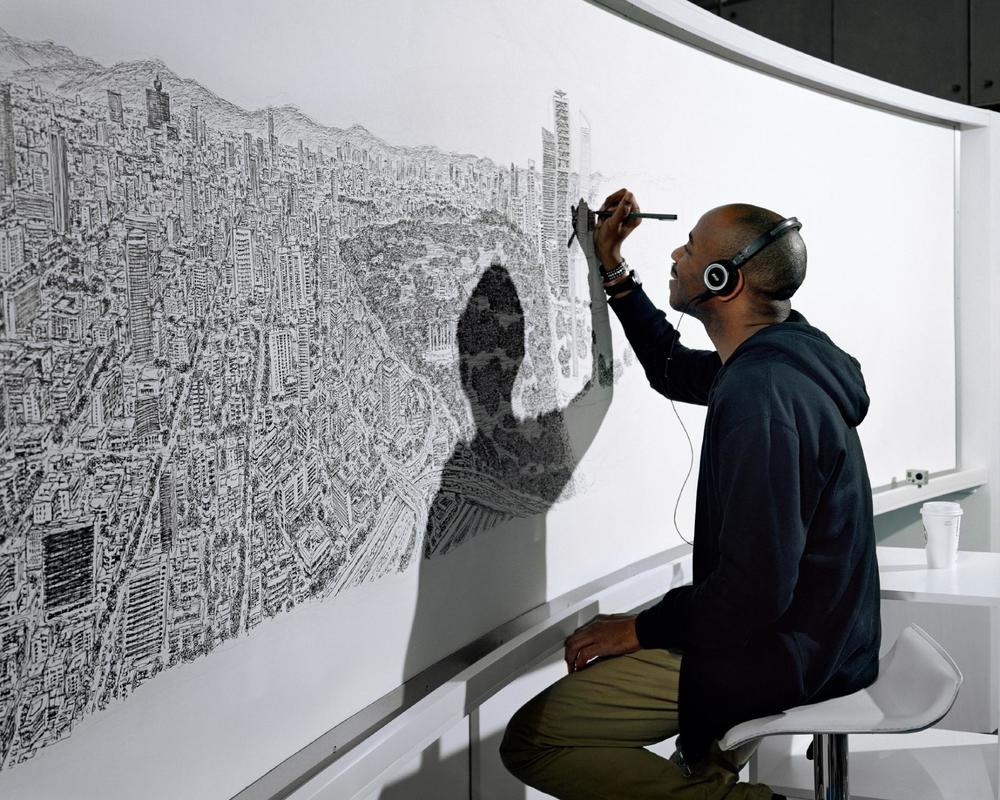